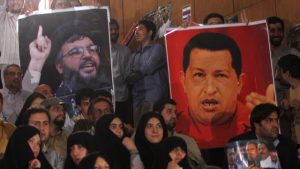 A group of hackers aligned with the opposition in Venezuela have broken into the country’s Directorate General of Military Counterintelligence, Israel Hayom’s Damian Pachter reported Monday.

Once inside the database, the hackers gained access to information on purported Hezbollah operatives living freely in the country under the protection of President Nicolas Maduro’s socialist government.

For years, Western intelligence organizations have warned of the presence of international terrorist organizations on Venezuelan soil. One of Iran’s greatest allies in South America, Venezuela is known as a diplomatic refuge for terrorists and local guerilla fighters. Even Petroleum Minister and former Venezuelan Vice President Tareck El Aissami has been tied to the Lebanese terrorist group.

In 2017, the US Treasury Department sanctioned El Aissami over money laundering and facilitating the drug trade. Two years later, in 2019, he was put on the US Immigration and Customs Enforcement’s Most Wanted List.

The hackers emphasized the operation was carried out in cooperation with former state intelligence officials. They revealed the terrorists had entered the country as Spanish-language students under the cover of “government language studies programs” via Margarita Island, a member of the hacking ring explained to Israel Hayom.

The operatives appear to be involved in arms and drug trafficking as well as money laundering to finance terror.

Many of the operatives are members of the Maklad family, originally from the Druze village of As-Suwayda, near the Jordanian border in southwestern Syria.

Jalal Maklad, for example, is described as “involved in the cocaine trade and the trafficking of strategic minerals and international terror financing.” He is said to reside in the Venezuelan state of Nueva Esparta.