You are here: Home / MidEastGulf / US to send warship, fighter jets to UAE after Yemen’s Iran-backed Houthi rebels attacks 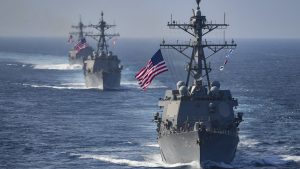 The United States will deploy a guided-missile destroyer and state-of-the-art fighter jets to help defend the United Arab Emirates after a series of missile attacks by Yemeni rebels, a US statement said Wednesday.

The deployment, to “assist the UAE against the current threat”, follows a phone call between Defence Secretary Lloyd Austin and Abu Dhabi Crown Prince Mohammed bin Zayed Al-Nahyan, the US embassy in the UAE said.

The guided-missile destroyer USS Cole will partner with the UAE Navy and make a port call in Abu Dhabi, the statement said, while the US will also deploy fifth-generation fighter planes.

Other actions include “continuing to provide early warning intelligence,” it added.

The rebel attacks have opened a new front in Yemen’s seven-year war, which has killed hundreds of thousands directly or indirectly and displaced millions.

On January 24, US forces stationed at Abu Dhabi’s Al Dhafra air base fire Patriot interceptors and scrambled to bunkers as two ballistic missiles were shot down over the city.

And on Monday, a third missile attack was thwarted during the visit to the UAE of Israeli President Isaac Herzog.

The US, a supporter of the Saudi-led coalition, intends the deployment to be “a clear signal that the United States stands with the UAE as a long-standing strategic partner,” the statement said.

The rebel attacks have raised Gulf tensions further at a time when international talks over Iran’s nuclear programme are stumbling, and have helped push oil prices to seven-year highs.

The Houthis began attacking UAE interests after a series of defeats on the ground in Yemen, inflicted by the UAE-trained Giants Brigades militia.

In early January, the rebels seized a UAE-flagged ship in the Red Sea, saying it was carrying weapons — a claim denied by the Emirates.

Yemen’s civil war began in 2014 when the Houthis seized Sanaa, prompting Saudi-led forces to intervene to prop up the government the following year.

The UAE, one of the world’s biggest arms buyers, announced a redeployment from Yemen in 2019 but remains an influential player.

The grinding conflict has left millions on the brink of famine, according to the UN, which has called it the world’s worst humanitarian crisis.