You are here: Home / Analysis / The Taliban’s “big rebrand” 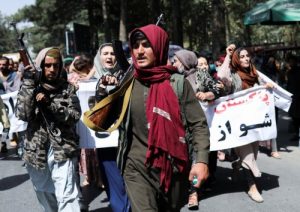 Now the de facto government of Afghanistan, the Taliban is trying to solidify its rule by going through a bit of a rebrand, a topic that the corporate media has covered acutely. The Taliban seems to believe this series of rhetorical overtures to the West is important for gaining international recognition. More important, however, is the Taliban’s attempt to domestically rebrand itself, hoping to legitimize its regained authority to Afghans of different ethnic and religious stripes in various regions of the country, like reported by theamericanconservative.com.

Shocking as it may be for an American audience to hear, especially after the United States’ invasion of Afghanistan lasted 20 years and plenty in the foreign policy establishment were just fine prolonging the conflict another year (or five, or 10), the Taliban has bigger concerns than seeming moderate to gain approval with western media and governments. The Taliban has been attempting to undercut ISIS-K’s ability to recruit new fighters and garner public support by negotiating with Salafi imams who pledge their allegiance to the Taliban. While the Taliban has rebuffed claims that ISIS-K poses a substantial security threat or could challenge Taliban rule, which is true given the relatively limited number of ISIS-K fighters and capabilities, ISIS-K still presents a security challenge for the Taliban, especially in the Eastern regions of Afghanistan, where there are large Salafist populations.

The Taliban’s efforts to rebrand itself domestically began before the Taliban became the de facto government of Afghanistan in late summer of this year. In March 2020, the Afghan Salafist Council, led by its emir, Shaikh Abdul Aziz Nooristani, met with Taliban leaders and swore their allegiance to Shaikh Haibatullah Akhunzada, the Taliban’s leader. A roughly 20 minute video of the meeting, later released by al-Emarah studio, the Taliban’s media wing, under the title “Pledge of Allegiance of Salafi Ulama,” claimed that Nooristani, along with 32 Afghan Salafist ulema and officers, were loyal to the Taliban’s Emirate. They also asked the Taliban to recuse them from their war against ISIS-K, which they do not support because they believe their brutality goes against Islamic teachings, although ISIS-K was founded by Afghan Salafists and Taliban defectors. The Salafists even went on to claim that ISIS-K’s war against the Taliban is “an international conspiracy of the Jews and Crusaders.”

Prior to the meeting, the Taliban had already defeated ISIS-K fighters in skirmishes in the Nangarhar and Kunar provinces, and in late February the Taliban signed the Doha Agreement with the United States. These events bolstered the Taliban’s position in their negotiations with the Afghan Salafist Council. The Doha Agreement made it clear that the Taliban would remain after the United States’ departure, something of which the Taliban was eager to remind the Afghan Salafist Council. While the two have disagreements, both practical and theological, the Taliban told the Salafists that supporting them is the clear and only choice, and promised the Salafists that all sects of Islam would be free to practice in a Taliban-controlled Afghanistan, something easier for the Taliban to commit to in theory than in practice.

Then, it seemed clear to both the Taliban and the Afghan Salafist Council that the Taliban would once again come to control Afghanistan, or at least vast parts of it, after the United States withdrew. This was as members of the foreign policy establishment were claiming that the Islamic Republic of Afghanistan, and the Afghan Security Forces trained to protect it, would not collapse without the United States. Of course, America’s expert class would proceed to revise that estimate to a year, then six months, then three, and so on—only for the U.S. backed Afghan government to fall in a span of 72 hours.

However, since the Taliban took Kabul and became the country’s governing force, not all has gone according to the plan laid out in the March 2020 meeting between the Salafists and the Taliban. In nearly 20 provinces, the Taliban has shuttered the doors on more than three dozen Salafist mosques and seminaries. The Taliban has also waged a campaign against some of Afghanistan’s most influential Salafists throughout the country, claiming they are connected to ISIS-K. However, many of the Salafist intellectuals now under threat have previously condemned ISIS-K throughout its existence, censuring everything from its pledge of fealty to then-ISIS leader Abu Bakr al-Baghdadi to its brutality against civilians.

The Taliban also reportedly abducted Shaikh Abu Obaidullah Mutawakil, a prominent Salafist scholar, from his residence in Kabul on Aug. 28, for alleged connections to ISIS-K. Mutawakil was found to be brutally murdered one week later. It’s worth noting that, at one point, the Afghan government did take Mutawakil into custody for their own suspicions of ties to ISIS-K; however, ISIS-K allegedly offered no prayers for Mutawakil upon his death because of his stance against the ISIS caliphate.

A Taliban spokesperson, Zabiullah Mujahid, denied the Taliban’s involvement in the kidnapping and murder of Mutawakil. While his tweet did not offer any condemnation of the killing, Mujahid claimed the Taliban would perform an investigation surrounding his disappearance and later death. Mutawakil’s family, meanwhile, maintains that it was Taliban fighters who abducted him.

Taliban fighters spread throughout various localities have allegedly attempted to arrest even more Salafist scholars, but many went into hiding after Mutawakil was abducted, such as Abdul Zahir Daee, Ustad Maroof Rasikh, Shaikh Ahmad Shah, and Shaikh Sardar Wali. Whether or not these abductions were ordered by the Taliban’s top brass, or were carried out by local Taliban fighters acting on their own accord, we may never know.

However, the totality of the circumstances suggest that the Taliban has indeed violated its promises to the Salafists. To discourage Afghans from joining or supporting ISIS-K and maintain their territorial control over Afghanistan—especially in the Salafist-dense east—it seems the Taliban is opting to take a dual track of cooperation and repression against the Salafists. But their strategy seems to be leading to confusion, rather than making it clear the Taliban will tolerate Salafism, but remain intolerant of ISIS-K.

If they refuse to change their strategy, and make further attempts to keep the promises made to the Salafists, the Taliban could risk losing what they’ve waited 20 years to regain.