You are here: Home / West Asia / Taliban officials say their Army will include suicide bombers 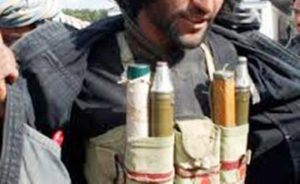 The future army of the Islamic Emirate of Afghanistan (IEA) will include a special battalion of suicide attackers, according to a spokesperson from the Taliban regime, like reported by vice.com.

Zabiullah Mujahid, the IEA’s deputy minister of information and culture, told Radio Azadi that the suicide unit will be active under the Ministry of Defense and will be part of the Taliban’s special forces.

The declaration follows previous, unconfirmed reports that the Taliban had formed a battalion of suicide bombers to help fight and prevent border conflicts, particularly at the Afghanistan-Tajikistan border in the northeastern Badakhshan province. Mullah Nisar Ahmad Ahmadi, deputy governor of Badakhshan, told media in October that the battalion was named Lashkar-e-Mansoori, or “Mansoor army,” and was the same as the one that would conduct suicide attacks targeting the security forces of the previous Afghan government, as well as their Western allies.

Ahmadi further claimed that the suicide bomber battalion was instrumental to the Taliban’s victory over the United States and its subsequent takeover of Afghanistan.

“The defeat of the U.S. would not be possible if not for this battalion,” he said. “These brave men would wear explosive waistcoats and would detonate the U.S. bases in Afghanistan. These are people with literally no fear who devote themselves for the consent of Allah.”

Suicide attacks have become a key military tactic for the Taliban, who first embraced the practice in 2003 as they launched an insurgency campaign against U.S. forces. According to a 2021 study, the group has since claimed more suicide bombings than any other terrorist organisation in history.

“[Suicide bombings are] very important [to the Taliban], because this was one of their main instruments in harassing the U.S. and allied forces and inflicting fatalities,” Amin Saikal, adjunct professor of social sciences at the University of Western Australia and former Director of the Centre for Arab and Islamic Studies, told VICE World News.

By declaring the formation of an official suicide battalion, Saikal explained, IEA’s Taliban rulers are sending a firm message to the U.S. and its allies: “‘If you are going to continue the pressure on us … then we will be able to unleash our suicide bombers against you.’”

“This [suicide corps] is very much a defensive force; a deterrent force, to basically deter any internal hostilities or external aggression towards the Taliban,” said Saikal. “They are basically sending a signal to opposition inside Afghanistan, and opposition outside the country, that if you are going to destabilise our rule in the country, and if you are not really going to come to terms with us, and you engage in hostile actions towards us, then we will be prepared to make use of such a force in order to counter your opposition and your aggression.”

Other experts have highlighted the problems posed by the Taliban’s ongoing embrace and praise of suicide attacks, especially as the new and untested government seeks to unite the Afghan population and curry favour with the international community, which is crucial to fend off an accelerating economic and humanitarian crisis. In the weeks and months following the fall of Kabul, the Taliban government – which is still yet to gain official recognition from any other nation – was eager to show a more moderate face to the global community, reshaping its image and casting itself as a peaceful and diplomatic improvement on the old model.

But as William Maley, emeritus professor of diplomacy at the Australian National University, told VICE World News, Mujahid’s announcement of an official suicide corps “highlights the naïveté of the suggestion that there had emerged a ‘Taliban 2.0′, different from the version of the Taliban that was on display between their emergence in 1994 and their overthrow in 2001.”

Saikal agreed. “I think this will be very roundly condemned,” he told VICE World News. “No country will be prepared to recognise or give any credibility to a military force that includes a suicide brigade.”

The Taliban is not the only group that is deploying suicide bombers – even within Afghanistan. In late August, as Western forces were evacuating Afghanistan and thousands of civilians were desperately attempting to flee the country, a militant from Islamic State Khorasan Province (ISIS-K) detonated a suicide bomb at Hamid Karzai Internatiional Airport, killing himself and nearly 200 others.

More recently, on December 23, Kabul police said they shot dead a would-be suicide bomber outside Kabul’s main passport office as about 200 Taliban fighters lined up for travel documents. The attack was one of several launched against the Taliban since their return to power, most of which have been claimed by the local chapter of the Islamic State.

Saikal said it’s possible that the Taliban will use some of its suicide bombers against Islamic State targets. Maley, however, was less certain.

“It is not clear against which organised enemies a Taliban campaign of suicide bombing might be directed,” he said. “More worrying is the likelihood that the Taliban, in no position to win generalised normative support (‘legitimacy’), will resort to high-level coercion against ordinary Afghans to ensure compliance with Taliban demands.”