You are here: Home / Europe / Syrian charged with preparing attack in Germany 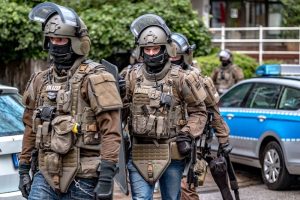 A Syrian man who allegedly supported the Islamic State (ISIS) group’s ideology has been charged with making preparations for an attack in Germany, prosecutors said Tuesday, according to The Associated Press.

The suspect, who was identified only as Abdullah H. in keeping with German privacy rules, was charged at a Berlin court with preparing a serious act of violence and terror financing. He was arrested in November 2019 in another case, which prosecutors gave no details of.

Federal prosecutors said that he decided by June 2019 to carry out an attack in Germany that would be on a similar scale to previous ISIS attacks in Europe. They said his aim was to kill or wound as many people as possible.

The alleged plans were halted by his arrest, prosecutors said, according to AP.

Germany has been hit by several terrorist attacks in recent years.

In one attack, a 17-year-old Afghani with an axe attacked passengers on a train in Wurzburg before being shot dead by security forces.

In a second incident, an attacker set off a bomb in a restaurant in Ansbach, killing himself and wounding 12 others.

The worst such attack took place in December of 2016, when Tunisian terrorist Anis Amri killed 12 people and injured dozens more when he drove a truck into a Christmas market in Berlin.

In early October, a knife-wielding attacker killed one tourist and seriously injured another in the city of Dresden. Prosecutors later said the incident is being treated as a terrorist attack.