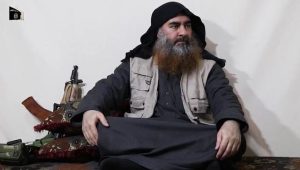 Troops targeted a large house in Atmeh in the Idlib region where the ISIS leader was hiding.

Reports of an explosion inside the house are thought to have come a result of al-Hashimi al-Qurayshi blowing himself up, according to the New York Times.

President Biden announced: “Thanks to the skill and bravery of our armed forces, we have taken off the battlefield Abu Ibrahim al-Hashimi al-Qurayshi – the leader of Isis.”

He said all Americans involved in the operation returned safely.

Mr Biden said he would address the American people later on Thursday on the raid.

ISIS announced al-Qurashi, also known as Abdullah Qardash or Hajji Abdullah, was the leader of the organization after former leader Abu Bakr al-Baghdadi also blew himself up in a similar raid in 2019.

The raid is thought to be the largest US-led raid in Idlib since the 2019 assault which killed al-Baghdadi.

A special forces team was deployed at night. They surrounded the house and ordered women and children to evacuate via loudspeakers, before engaging opposition fighters in combat.

Helicopter strikes reduced large sections of the house to rubble – though some of the damage is believed to have come as a result of the target’s suicide blast.

Pentagon spokesperson John Kirby said in a statement: “The mission was successful. There were no U.S. casualties.”