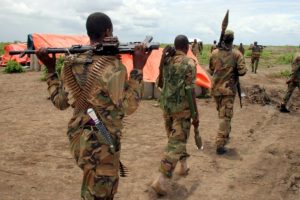 The army reclaimed the villages of Adiimoole and Degwariiri from al-Shabaab, destroying several hideouts and vehicles, an army captain in the region told Anadolu Agency, requesting anonymity as he was not authorized to speak to the media.

He said the operation inflicted “heavy casualties” on al-Shabaab and the two terrorists caught were “senior operatives” of the terror group.

Lower Shabelle has seen a rise in terrorist attacks over recent months, including a mid-December 2021 assault by al-Shabaab on a base of the African Union Mission in Somalia that killed and wounded several soldiers.

The Somali military has stepped up operations against the terror group, which is linked to al-Qaeda, in the region.

Last month, at least 25 al-Shabaab terrorists were killed and dozens wounded in an army offensive – led by commandos trained by the Turkish military – near the town of Barire in Lower Shabelle.