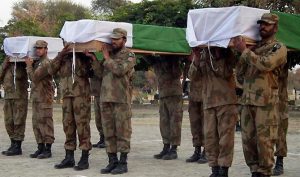 Interior Minister Sheikh Rashid Ahmed said in a recorded video message that a clearance operation was underway in Nushki and Panjgur districts, where the raids took place late Wednesday.

“The terrorists were repulsed from both places… As of this moment, four or five people [assailants] in Panjgur are surrounded by security forces and will be neutralized soon,” Ahmed said.

A military statement issued later confirmed the clashes also injured four soldiers. “As per initial investigation, intelligence agencies have intercepted communications between terrorists and their handlers in Afghanistan and India,” the statement said.

The authenticity of the claim could not be verified from independent sources, as separatists often issue inflated details for such attacks.

That attack killed 10 Pakistani soldiers while one attacker was killed in retaliatory fire and the rest managed to escape, according to officials.

Two days after the deadly insurgent raid, a bomb attack in another district killed three paramilitary forces and wounded eight others.

Baluchistan, rich with natural gas and minerals, has for years experienced insurgent attacks, but the violence has surged dramatically in recent weeks.

The overnight attacks came hours before Pakistani Prime Minister Imran Khan left for Beijing to attend the opening of the Winter Olympics Games.

In a statement on Twitter, Khan paid tributes to security forces for defeating the attacks.

China has invested billions of dollars in infrastructure projects in the province and elsewhere in Pakistan as part of Beijing’s global Belt and Road Initiative.

Officials in both countries say the increase in militant violence is aimed at undermining the multibillion-dollar megaproject known as the China Pakistan Economic Corridor, which includes roads, power projects and ports in the South Asian nation.

The stepped-up separatist violence comes as the outlawed Pakistani Taliban, known as the Tehrik-i-Taliban Pakistan, have also intensified attacks across the country, mainly targeting security forces.