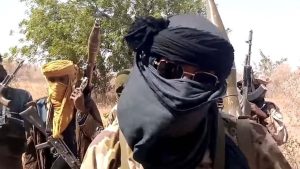 Terrorists in their numbers, armed with sophisticated weapons, have again attacked Dantsauni village in Batagarawa Local Government Area of Kâtsina State where they killed three people, like reported by dailytrust.com.

One of the deceased persons was identified as Abdulrashid Abba Manna, a Katsina resident, who went to farm in the morning at Dantsauni village but was trapped and killed by the terrorists.

This came barely three days after bandits attacked surrounding communities of Babbar Ruga, Kwarin Maikotso and Kore villages where they operated unchallenged and killed two people with eight others abducted.

Dantsauni village is only one kilometre away from Babbar Ruga village.

During the attack, the terrorists also abducted dozens of people including women and children while hundreds of people were seen running towards the ancient city of Katsina for their dear lives.

An eyewitness account revealed that the terrorists also fired some shots along Katsina Ring Road which is very close to the city.

Residents of the area said no security personnel was seen during the over 45 minute operation by the terrorists which happened in broad daylight.

When contacted, the police spokesman in Katsina, SP Gambo Isah, who confirmed the attack said one person was killed and two others injured.