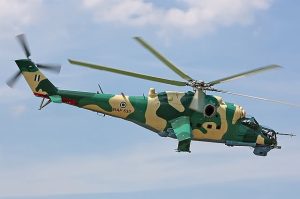 The strikes hit camps in Ilela village, controlled by bandit commanders, Gwaska Dankarami and Alhaji Abdulkarami. Both of them were dead.

They recently carried out a series of attacks around Safana and Dan Musa Local Government areas.

At least a dozen persons were killed in the Illela massacre; many others were injured.

“Further scrutiny revealed terrorists on 19 motorcycles riding along multiple tracks leading into a cave within the rocky hills.

“A fighter jet and helicopter gunship ensured maximum casualty on the bandits and destroyed their enclaves”, an intelligence officer told PRNigeria.

Another operative disclosed that 43 bodies were counted, including that of Alhaji Shingy, a brother of killed bandit leader Auta.

A number of weapons, logistics, motorcycles, among others, were demolished during the offensive.