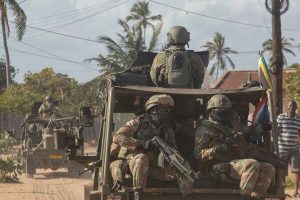 The Mozambican defence forces and their allies from SAMIM (SADC Mission in Mozambique) have killed and captured Islamic terrorists who had attempted to attack the town of Nangade in Mozambique’s northern province of Cabo Delgado, like reported by pindula.co.zw.

According to reports in the news sheet “Mediafax”, all of the attackers were killed or captured.

The report stated that the terrorists attacked Chitunda, an outlying neighbourhood of Nangade town at nine in the morning.

This was the first time Nangade had come under attack, and the first time any district capital had been attacked since troops from SAMIM and Rwanda entered the conflict.

The jihadists entered Chitunda and murdered three people, while many others fled into the bush. They went on to burn down about 20 houses and loot property.

According to the “Mediafax” sources, there were seven people in the terrorist group, only three of whom were armed.

The unit of the Mozambican defence and security forces stationed in the town, supported by SAMIM troops from Lesotho, reacted quickly, killing two of the raiders and capturing the other five.

Earlier in the day, the group had been spotted in fields in the area of Nakaindili, about three kilometres from the town.

One of the terrorists was captured and told the authorities that the other seven were on their way to the town.

“Mediafax” also reported that the Tanzanian contingent of SAMIM has, in recent days, captured 95 youths on their way to terrorist bases.

Most of them were captured, not inside Mozambique, but in Mahea village in the southern Tanzanian province of Mtwara.

Some of the youths had taken refuge in the Mahea mosque.