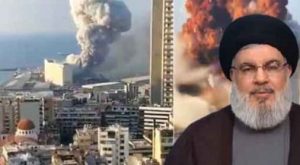 Hezbollah security official Wafiq Safa reportedly threatened Tarek Bitar, the judge leading the investigation into the Beirut Port explosion which devastated Lebanon’s capital in August 2020, this week, saying the movement would remove Bitar from his position by force if the judge displeases them.

“We have had enough of you. We will go to the end of the legal path, and if that does not work, we will remove you by force,” said Safa to Bitar, according to Edmond Sassine, a journalist with the Lebanese LBCI news.

LBCI and the Lebanese Annahar news both reported based on judicial sources on Wednesday that Bitar had confirmed the reports about the alleged threat by Hezbollah.

Lebanese Interior Ministry Bassam Mawlawi denied to the Lebanese Al-Akhbar news that he was aware of the reported threat to Bitar, saying that “security forces are doing their duty and the judge is doing his duty.”

Families of the victims of the Beirut explosion expressed outrage at the report, telling Lebanese media that they would be guards under Bitar’s house and stressing that the judiciary must be respected.

The head of Lebanon’s Kataeb Party, Sami Gemayel, spoke out against the threat, saying his party holds Hezbollah responsible for obstructing the investigation into the port blast.

Hezbollah has been accused for being responsible for the improper storage of the ammonium nitrate which caused the explosion last year, as the terrorist movement largely controls Lebanon’s ports.

Safa was sanctioned by the US Department of the Treasury in 2019 for exploiting Lebanon’s ports and border crossings to smuggle contraband, including illegal drugs and weapons, into Beirut and facilitate travel on behalf of Hezbollah.

Finianos has filed a request to remove Bitar from the case due to “legitimate suspicion,” saying the arrest warrant was illegal and claiming he beared his responsibilities while in office.

Over a year after an explosion in the Beirut port killed over 200 people and wounded thousands, the investigation is still ongoing without any conclusions reached nor any officials charged or sentenced.

Hezbollah has reportedly denied having any responsibility for storing the ammonium nitrate or arms at the port. Hezbollah Secretary-General Hassan Nasrallah claimed in August that investigations were being held up in an effort to help insurance companies avoid paying the victims.

The explosions was caused by a large amount of ammonium nitrate improperly stored at the port for years. The chemicals arrived on a Russian-leased cargo ship that made an unscheduled stop in Beirut in 2013. An FBI report seen by Reuters earlier this year estimated around 552 tonnes of ammonium nitrate exploded, far less than the 2,754 tonnes that arrived.

A report released by Human Rights Watch earlier this year concluded there was strong evidence to suggest some Lebanese officials knew about and tacitly accepted the lethal risks posed by ammonium nitrate.