You are here: Home / Europe / Knifeman shouting ‘France is ruled by Islamic State’ shot by police 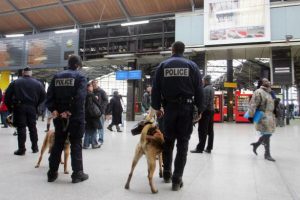 A knifeman has been shot by police after shouting ‘Allahu Akbar, France is ruled by Islamic State’ at a busy Paris train sation, like reported by metro.co.uk.

The situation at Saint-Lazare is said to have escalated after the man was stopped by officials for not wearing a mask and refused to comply yesterday evening.

He then took out a blade and charged towards them shouting pro-ISIS slogans before police shot him twice in the chest, according to French media.

The assailant has been taken to hospital and remains in a life-threatening condition. A Paris police spokesman had no immediate comment.