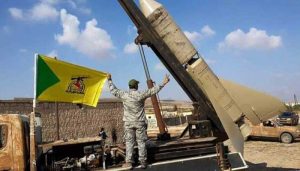 The Iraqi Hezbollah Brigades have raised 1 billion Iraqi dinars ($685,000) as part of a campaign to support Yemen’s Houthi militia, also known as Ansar Allah, according to Iraqi media reports.

The campaign is called “Your Money Means Drones,” according to a Jan. 31 report on Iraq’s Al-Etejah TV. An unidentified Shi’ite scholar said in the report that the drones would be used to “retaliate” against Saudi Arabia and the United Arab Emirates.

“The Hezbollah Brigades of the Islamic resistance has launched a campaign titled ‘[Turn] Your Money into Drones,’ with a sum of over one billion Iraqi dinars, as an initiative to support the Yemeni people in their plight, as a result of the U.S.-backed Saudi-Emirati aggression. Everyone must stand with the Yemeni people,” he said.

“[Iraqi Hezbollah Brigades spokesman] Abu Ali al-Askari has donated a large sum for the drones, that are used to retaliate [against Saudi Arabia and the UAE], because we believe that you can only fight fire with fire. You cannot defeat the KSA, the U.S. and Israel, unless you give them a taste of their own medicine.

“Today, the Yemeni drones have managed to cause a significant change. Therefore, Abu Ali al-Askari has issued a blessed call for all the free people—all the zealous people who wage Jihad and resistance—to support the Yemeni people,” he said.

On Jan. 24, the Houthis launched two ballistic missiles at the UAE, which were downed by Patriot missile interceptors. On Jan. 17, three foreign workers (two Indians and a Pakistani) were killed in a Houthi drone attack on the UAE that coincided with a Houthi missile strike in southern Saudi Arabia, in which two people were wounded.

On Jan. 31, the same day the report on the “Your Money Means Drones” campaign aired, the Houthis launched another missile attack on the UAE. The attack coincided with the historic visit to the UAE of Israeli President Isaac Herzog.

“The very same missiles and drones that have reached the UAE today will reach Tel Aviv and the Eilat Port,” said Jafari.

As for the UAE, he said, “Some of the targets that have been defined will be announced in the coming days. Personally, I expect that the Burj Khalifa and Expo 2020 [Dubai] will be targeted.”