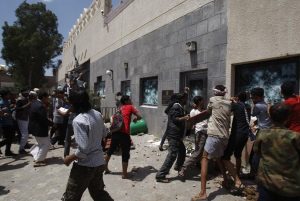 Iran-backed Houthi militants broke into the compound housing the closed U.S. Embassy in Sanaa, Yemen, and detained many Yemeni staffers, like reported by btimesonline.com.

The majority of those detained have been released, according to State Department officials, but the Houthis continue to detain other Yemeni embassy staffers, according to the Free Beacon.

Rumors circulated earlier this week that the rebel group had unlawfully detained 25 Yemenis working for the U.S. Embassy and USAID in Sana’a, Yemen’s main city.

According to a State Department official, the detained Yemeni laborers worked security and guarded the compound’s exterior.

As a result of Yemen’s civil war, the United States moved its embassy activities to Riyadh, Saudi Arabia, in 2015.

Saudi Arabia opposes the Houthi rebels and has started a military intervention in Yemen to push them back and prevent Iran from increasing its influence in the area.

Yemen has been engulfed in a terrible civil war between the Houthi rebels, who are funded, financed, and armed by the Iranian government, and the Yemeni government in power, which has Saudi Arabia’s assistance.

The battle is frequently referred to as a “proxy war” waged on the ground by the two Yemeni sides, but mostly on behalf of the two larger countries.

U.S. President Joe Biden reversed the Trump administration’s designation of the Houthis as a foreign terrorist organization within a month of taking office.

The Houthis have been cut off from financial and other material resources that are routed via U.S. banks or other American entities as a result of the designation.

The decision, according to Secretary of State Antony Blinken, is “a recognition of Yemen’s severe humanitarian circumstances.”

U.S. State Department officials have vowed to continue diplomatic efforts, including through foreign partners, to obtain the release of our personnel and the emptying of our site.

Yemen is the Middle East’s poorest country, and the continuous conflict has resulted in a massive humanitarian disaster.

The United Nations estimates that 233,000 people have died as a result of the civil war since it began in 2014.