You are here: Home / Mediterranean / Iran-backed Hezbollah smuggling weapons to Arab Israelis to sow clashes between Jews and Arabs 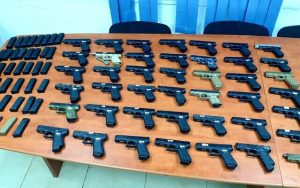 The Lebanon-based Hezbollah terror group is trying to smuggle weapons into Israel for use by the Arab Israeli community in future clashes, a police official has said according to toi.com.

The Israel Police have noticed a significant increase in efforts to smuggle weapons into the country via the Lebanese and Jordanian borders in the months since a May conflict with the Gaza Strip that was accompanied by some of the most severe rioting in decades between the Jewish and Arab communities in Israel, Channel 12 reported Monday.

There has been a several-fold jump in smuggling and a marked improvement in the quality of the weapons being sent, in what police described as a “strategic threat” to the country, according to the report.

Police say the weapons’ intended destination is crime organizations in the Arab community, where they would also be available for terror attacks in the event of another surge in violence between Jews and Arabs.

The head of the northern district police intelligence department, Chief Superintendent Yaron Ben-Yishi, told the network that 95 percent of the smuggling from Lebanon is directed by the Iran-backed Hezbollah.

Ben-Yishi said that whereas in the past Hezbollah tried to push drugs into Israel to “poison our young people,” the terror group has now switched tactics to focus on weapons smuggling instead in preparation for an expected “doomsday.”

During May’s clashes “they saw the sensitivity surrounding the Temple Mount [in Jerusalem] and they know that on the day that things explode, Arab Israelis will have enough weapons to use them for their [Hezbollah’s] hostile terror activities,” he said.

In July Israeli troops intercepted what was reportedly the largest attempt in recent years to smuggle weapons across the border from Lebanon.

Since the start of the year, northern district police officers have seized 140 pistols and 20 assault rifles but estimate that many more weapons were successfully brought into the country, Channel 12 reported in a preview of a more in-depth investigation to be broadcast Tuesday.

On Sunday, an Israeli man was shot dead and four others injured in a terror attack in the Old City of Jerusalem carried out by a Palestinian gunman. The shooter, an East Jerusalem resident identified as a member of the Hamas terror group, was armed with a submachine gun manufactured by Italian firearms producer Beretta, a significantly better quality weapon than the guns produced locally in West Bank workshops.

Arab communities have seen a surge in violence in recent years, driven mainly, but not only, by organized crime.

On Monday a school principal was shot and injured in the northern Arab Israeli city of Arraba.

Since the beginning of 2021, at least 111 Arabs were killed in suspected homicides, according to the Abraham Initiatives nonprofit. Of them, 93 were Arab citizens of Israel and another 18 were Palestinians, either from East Jerusalem or with Israeli residency.

Arab Israelis blame police, who they say have failed to crack down on powerful criminal organizations and largely ignore the violence, which includes family feuds, mafia turf wars and violence against women. The community has also suffered from decades of neglect.

In October, the cabinet passed a plan to allocate NIS 2.5 billion ($750 million) over the next five years to fight the wave of criminal activity in Arab communities.