You are here: Home / Analysis / India’s and Pakistan’s attitude towards Afghanistan (and Islamic terrorism) 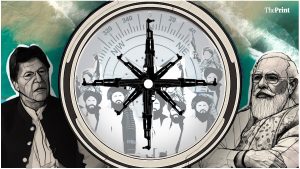 India is emerging as a global hub for the development of intelligence operations on Afghan soil, while also becoming the vital sponsor of the military opposition to the Taliban. And as a side effect of the Taliban’s seizure of power, the Pakistani counterpart of the TTP movement is also strengthening, like reported by israeldefense.co.il.

The CIA, MI6 and the Russian Security Council have recently pointed out that India is emerging as a global hub for the development of intelligence operations on Afghan soil, while also becoming the vital sponsor of the military opposition to the Taliban.

A joint working group on Afghanistan established by the Secret Intelligence Service (SIS)-MI6, and India’s external intelligence service, the Research and Analysis Wing (RAW), are beginning to take action along these lines.

The new structure was inaugurated on September 3-4, 2021 in the presence of the Directors of both Services, Richard Moore and Samant Goel. The British Service is providing intelligence and data on South-East and South-West Afghanistan, where it operated in the past two decades, while the Indian Service provides daily updates on Northern Afghanistan, where it has close ties with the non-Pashtun ethnic group in the region.

Since the fall of Kabul last August, the RAW has been closely involved in uniting anti-Taliban forces into a common front with the Afghanistan National Resistance Front (NRF), which consists mainly of former Northern Alliance groups and organisations.

The Indian Service has also brought a number of officers from the National Security Directorate (NSD), the former Afghan intelligence service, to the field of operations.

Great Britain may also be interested in the logistical link that India has established with Tajikistan to support the NRF. It is also seeking Indian assistance for facilitating the sending – for observation purposes – of drones from the Indian Air Force’s (IAF) Gissar Military Airport (GMA) in the village of Ayni, near the Tajik capital Dushanbe.

The GMA base was also the focus of a visit by CIA Chief William Burns on September 8, 2021, when he met with RAW officials and Ajit Doval, national security adviser to Prime Minister Narendra Damodardas Modi.

US officials discussed the possible transfer of some 20 former Afghan Air Force aircraft and an equal number of helicopters from the Termez base in Uzbekistan to the GMA, where they would be made available to the NRF. The US military would agree to maintain them, but such an arrangement would require an intergovernmental agreement, which would require the Indian Air Force to purchase spare parts and other equipment for the Afghan aircraft originating from the former USSR. The planes would be operated by the personnel of the former Afghan Air Force while the US government would be paid for the spare parts.

In the meantime, the US Special Operations Command (USSOCOM) could move to Indian bases in Ladakh, on the border with Pakistan, to conduct counter-terrorist operations. This latest agreement between the White House and Pakistan’s traditional enemy has caused some tension in Islambad. After visiting India, Burns met with the Chief of Pakistan’s armed forces, Major Qamar Javed Bajwa, and with Faiz Hamid, Chief of the well-known and powerful Inter-Services Intelligence (ISI), which has always supported the Taliban currently in power in Kabul.

Burns was in Islamabad on the same day that Nikolai Platonovič Patrushev, the Head of the Russian Security Council, visited New Delhi, where he also met Ajit Doval. In a telephone conversation between President Vladimir Vladimirovič Putin and Modi on August 24, the Russian and Indian intelligence services began working together to establish a new attitude towards Afghanistan.

Russia accepted India’s request for financial and military assistance to the NRF. Russian forces have already strengthened their positions in neighbouring Tajikistan. The Kremlin would like to involve Iran in the discussions, and the new Iranian Foreign Minister, Hossein Amir-Abdollahian, will soon visit New Delhi.

Despite the closeness between Islamabad’s intelligence and the new rulers in Kabul, the strengthening of the Pakistani component of the Taliban, allied with the Islamic State in Khorasan, does not like the Pakistani ISI leadership.

As a side effect of the Taliban’s seizure of power in Afghanistan, the Pakistani counterpart of the Tehrik-i-Taliban Pakistan (TTP) movement is strengthening its position in Islamabad, especially since the new leaders in Afghanistan have released a number of its members from prison.

This is causing some concern to the ISI, especially since the TTP established an alliance with the Islamic State in the aforementioned Khorasan Province (EIPK), which was involved in attacks on a mosque in Kunduz and the Kabul airport on August 26. The ISI leaders called for the Taliban’s help for preventing the TTP development.

Pakistani Prime Minister Imran Khan announced that an amnesty was possible for the TTP militants who surrendered their weapons and swore allegiance to Pakistan’s Constitution, but for the time being the Pakistani Taliban have refused to compromise. The ISI believes that the TTP is supported by the Indian RAW, which seeks to destabilise Pakistan while the situation in Afghanistan is in flux.

Led since 2018 by Nour Wali Mehsud, a close relative of Baitullah Mehsud, the movement’s founder, who was killed by a drone in 2009, TTP members include former Pakistani armed forces personnel, some of whom quickly joined the EIPK.

A further source of concern to the ISI is the alliance between the EIPK and the TTP, which frightens Kabul, especially since attacks in Afghanistan have increased. Mullah Abdul Haqq Wathiq, Chief of the new Taliban intelligence service in Kabul, has admitted that the EIPK has managed to create sleeper cells in the capital and is now trying to target both Pakistani and Afghan officials and law enforcement agencies.

The ISI believes that the RAW is also trying to infiltrate the EIPK, but that the expansion of the movement has mainly to do with the collapse of Ashraf Ghani’s regime on August 15 and the weak security and intelligence ability of the new Taliban authorities.

As has long been said, India and Pakistan are traditional enemies and Pakistan’s close friends are obviously India’s enemies.

Therefore, when the Taliban started fighting the pro-US Afghan government, India continued to invest money and weapons to support the anti-Taliban alliance. After the United States of America invaded Afghanistan, India did not hesitate to support the new government installed by the White House.

Statistics show that since the war in Afghanistan in 2001, India has participated in the construction of schools, roads, dams and hospitals in 34 provinces of Afghanistan, with a total investment of over three billion dollars.

Even before the final fall of Ghani’s government, India was still investing money and still hoping for a miracle. The miracle, however, did not happen and the Taliban returned. So much so that the Indian media complained: so much investment and influence wiped out at the same time.

The Indian media are widely read and watched in Afghanistan, despite being sceptical of the Taliban’s liberal promises.

In fact, India is particularly worried. The greatest foreign disasters in Indian history have all come from the Hindu Kush mountains in the North. Those who are familiar with history know that the Muslim Mughal dynasty, which ruled India for centuries (1526-1803), originated in Afghanistan and then went south to conquer India.

India’s real concern is that the rise of the Taliban will inspire the Muslim people in India (one hundred million believers) and intensify sectarian conflict, particularly over the issue of Indian Kashmir.

What struck the Indians most was a statement by Suhail Shaheen, spokesman of the current government in Kabul. He said that the Taliban had no policy to launch armed operations against any country, but as Muslims they had the right to speak about Kashmir to India itself and to other countries: for the first time, the Taliban commented on the Kashmir issue.

In reality, it is almost impossible to resolve all kinds of contradictions for over twenty years. Especially considering the deep geopolitical contradictions. But after all, India is a neighbouring country and the Taliban have no interest in colliding directly with it.

There will certainly be conflicts and claims, but there are areas where there will be cooperation and a win-win game. The biggest problem in Afghanistan now is reconstruction after the war. Among neighbouring countries, India’s economic strength is second only to China and it is not impossible to invest in Afghanistan.

It depends on the wisdom of all parties. Now, the whole world is indeed watching to see if the Taliban can deliver on their promises. India’s anxiety, however, is unquestionably a physiological fact.

The Taliban want to change, to be open and tolerant, to keep their promises and have no past grievances with India. India needs to change its mindset. In the past, the Taliban were Pakistan’s brothers, but now, as noted above, there are disagreements and contrasts between Kabul and Islamabad, between a traditional ally and some Afghan components of Pakistani origin that play at destabilisation.