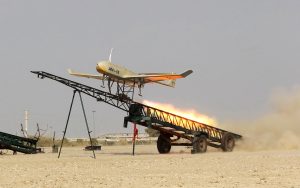 The Lebanon-based terrorist group Hezbollah is estimated to have amassed about 2,000 unmanned aerial vehicles over the past 15 years with the help of its Iranian sponsor, according to a new report by the Israel-based Alma Research Center and like reported by algemeiner.com.

Hezbollah has received both advanced UAVs from Iran, as well as assistance in developing and manufacturing them independently, according to the report. The Islamist group has deployed drones since the 1990s in Lebanon, Syria, and against Israel. Hezbollah is believed to have had less than 50 UAVs in 2006, the year of the Second Lebanon War, but subsequently ramped up its arsenal to 200 by 2013. It had about 800 UAVs in 2016, according to the report.

Hezbollah “most likely” has advanced UAV models like the Karrar type, which is meant to disrupt airstrikes, and the Saegheh type, which can carry anti-tank missiles, among others. The group additionally uses dozens of drones, mostly Chinese-made, for photography as well as for carrying and dropping bombs.

Since Iran developed its first drone back in 1984, it has built up a “UAV army” capable of deployment across the Middle East, significantly extending the country’s operational reach, according to the report. The UAVs pose a distinct threat to Israel, as a “swarm” could attack air defense systems in the country’s north or shut down the Haifa port.

Beyond Hezbollah, Iran-made UAVs are also being proliferated to Shi’ite militias in Syria and Iraq, the Houthis in Yemen, and to Hamas and Palestinian Islamic Jihad in the Gaza Strip.

This September, Israeli Defense Minister Benny Gantz described the drone army as “one of the most significant tools developed by Iran.” The force is “an array of deadly, precision weapons that, like a ballistic missile or a plane, can cross thousands of miles,” he said. “The Iranians produce and export these aircraft to their proxies, in coordination and led by the IRGC Air Force and Quds Force.”

Gantz last month identified two bases in southern Iran that have been used to launch maritime UAV attacks, and said Tehran deploys drones not only for offensive operations, but also to deliver weapons to proxies.

Earlier this year, the Israeli military shot down a suicide drone carrying explosives that was launched by Hamas, which showed similarities to other UAVs used by Iran’s “Axis of Resistance.”