You are here: Home / Europe / Hamas to be declared terrorist organisation by British government 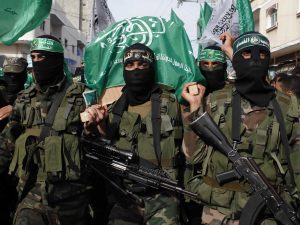 The British Home Secretary Priti Patel is to announce that the political wing of Hamas is to be proscribed by the UK government as a terrorist organisation after describing it as “fundamentally and rabidly antisemitic”, like reported by middleeasteye.net.

The move means supporters of the group will face up to 10 years in prison under the UK’s Terrorism Act.

Wearing clothing that suggests support for Hamas, arranging meetings for the organisation, or publishing an image of its flag or logo that would lead to the same conclusion, would be in breach of the law.

The military wing of the organisation, the Izz al-Din al-Qassam Brigades, has been proscribed in the UK since 2001.

Patel told reporters in Washington: “We’ve taken the view that we can no longer disaggregate the sort of military and political side.

“It’s based upon a wide range of intelligence, information and also links to terrorism. The severity of that speaks for itself.”

‘Anyone who waves a Hamas flag’
Patel will make the announcement in a speech on security on Friday at the Heritage Foundation, a Washington-based conservative think tank.

“Hamas is fundamentally and rabidly antisemitic,” she will say in the address.

“Antisemitism is an enduring evil which I will never tolerate. Jewish people routinely feel unsafe – at school, in the streets, when they worship, in their homes, and online.

“This step will strengthen the case against anyone who waves a Hamas flag in the United Kingdom, an act that is bound to make Jewish people feel unsafe.”

The home secretary aims to push through the change in parliament next week.

Hamas took control of the Gaza Strip in 2007 after winning the previous year’s election.

The result was not recognised by its political rival Fatah, and internecine fighting broke out which resulted in Fatah being largely routed from the Gaza, but maintaining power in the West Bank.

More than two million Palestinians are packed into Gaza, an area the size of the US city of Detroit.

Under blockade by Israel since 2006, the area has been described as “the world’s largest open-air prison”.

Since 2008, Israel and Hamas have fought three wars in addition to countless flare-ups between the two sides.