You are here: Home / Mediterranean / Egypt: 5 soldiers killed in attack on Sinai patrol 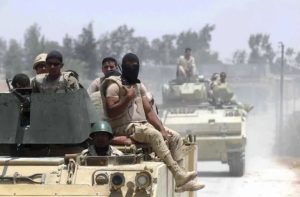 An attack on a military vehicle patrolling in Egypt’s Sinai region on Tuesday left five soldiers dead, sources have told to alaraby.co.uk.

The vehicle was participating in a combing operation near the town of Bir al-Abd in northern Sinai when it exploded, tribal sources and eyewitnesses said.

Among the dead were a military engineer, a sergeant, and three other soldiers, medical sources told Al-Araby Al-Jadeed.

The explosion came after weeks of relative calm in the region, scarred by years of conflict between the Egyptian government and the IS-affiliated group.

The Wilayat Sina (Sinai Province) affiliate of IS was formed a year later and hit and run attacks against Egyptian troops became common.

While Cairo says more than 1,000 militants have been killed, the civilian death toll is not known, as the Egyptian government has maintained a media blackout on independent reporting from the Sinai Peninsula.