You are here: Home / Senza categoria / Cruelty and bestiality behind the Islamic State’s overseas terrorist operation 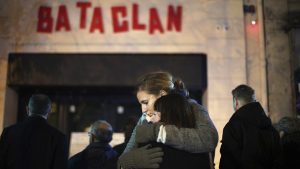 The Paris attacks trial on Thursday heard from two police witnesses. The first explained the way in which Islamic State organised its overseas terrorist operations. The second outlined the grisly career of Abdelhamid Abaaoud, one of the Paris killers, himself shot dead by police four days after the November 2015 attacks he helped to mastermind, like reported by rfi.fr.

Two things were made abundantly clear by Thursday’s evidence before the special criminal court in Paris.

The first is that Islamic State was an extremely well organised structure. The second is that certain members of the organisation were capable of an indescribable level of cruelty.

The court was shown images of the deliberate burning to death of a captured Jordanian pilot, and we were reminded of the exploits of Abdelhamid Abaaoud, laughingly dragging the bodies of eight victims at high speed in the wake of a powerful vehicle.

In the tragic catalogue of inhumanity exposed by this trial, this was an exceptionally bad day.

The administration of terror

The first witness, 948 SI, an anonymous senior investigator working for the French intelligence services, testified by video link. He was never visible on the courtroom screens, the image purposely blurred to protect his identity.

His evidence had two main axes.

He first explained how Islamic State carefully planned and organised overseas terrorism from its Syrian headquarters.

Then he outlined what the French police know of the Syrian activities of seven key figures allegedly involved in the Paris attacks.

If you previously imagined that Islamic State was a confused rabble of disaffected youngsters with powerful weapons, taking advantage of the Syrian civil war and a barbaric interpretation of Islam to murder people with impunity, you were wrong.

Not for the first time in this trial, we were reminded that the men behind IS were very serious about establishing a “state”. Every aspect of the terrorist operation was conceived to mimic the institutions offered by real nations.

On Thursday, the spotlight fell on the military organisation of Islamic State, specifically the units responsible for the elaboration and successful completion of overseas attacks.

The first was a sort of elite Pretorian Guard called Liwa Abou Bajr as Saddiq, described to the court as “the pivot of overseas operations”.

Members were selected for their bravery in battlefield situations, for their ideological commitment, for their physical condition. They could not marry or be married; they underwent intensive religious training to reinforce their determination.

They fought in key battles in Syria and Iraq. Crucially, they also provided the operatives for attacks in Paris and Brussels, as well as for the failed projects targeting the Thalys high-speed train and Amsterdam airport.

The efforts of these men were directed by an IS cell know as Copex, responsible for the coordination of exterior operations.

Projects were considered on the basis of their likely political and strategic impact.

Would an attack enhance the organisation’s global standing among its adherents? Would it put pressure on the government of an enemy state to soften its attitude to IS?

Once a project had been validated by the top IS council, the Lajna Al Moufawada, the necessary personnel were selected, financial and logistical support were organised, and the group was turned loose with a high level of autonomy as to the choice of targets, the timing, and the local organisation of any attack.

That seems to be how the 13 November 2015 Paris massacres were conceived, coldly debated by serious, determined men thousands of kilometers away, and then left in the hands of the selected members of an elite fighting force.