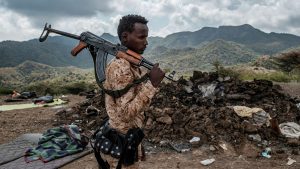 What began as a conflict between the Ethiopian Federal government and a local military in late 2020, exploded into a civil war in 2021 that has forced two million people to flee their homes and left hundreds of thousands of people in famine-like conditions. The war continues expanding, with displacements, ethnic killings and mass rape in the increasingly devastated region, like reported by voanews.com.

By the beginning of 2021, the war in the Tigray region of Ethiopia, then more than a month old, had forced tens of thousands of people to flee across the border to Sudan. Refugees reported ethnic massacres, sexual assaults and mass arrests.

In the months that followed, the humanitarian crisis deepened. More than a million people were displaced inside Ethiopia and aid workers warned of looming famine.

The few hospitals not damaged or destroyed in the region were packed with war wounded, including children who had been stabbed, shot, or become victims of newly laid landmines.

Goitom’s father, Gebreyohannes Ataklti, says his son was taking the goats to graze [and then he stepped on a landmine.] Goitom is too weak to speak.

The war broke out in the Tigray region in late 2020 between the federal government and local Tigrayan forces. It quickly expanded to include other regional forces allied on both sides and Eritrean forces fighting with the government.

Hundreds of women and girls have come forward, and aid workers say many, many more have not.

Mihira Redae is a case worker for sexual assault victims in Ayder Referral Hospital in Mekelle, Tigray’s regional capital. She says many women who are raped by soldiers are often afraid to come forward, and many others have no access to health care.

A national election in June re-established the authority of Prime Minister Abiy Ahmed, a Nobel Peace Prize winner, who then had control of the Tigray Region. About a week later, Tigrayan forces re-captured the region and the war escalated, now engulfing many areas beyond Tigray. Abiy has vowed to crush his enemies.

On December 17, the United Nations voted to investigate abuses by both sides of the conflict, including the reported mass detention of as many as 7,000 people allegedly sympathetic to Tigrayan interests, among them nine U.N. workers.

In the battered Tigrayan countryside, many say they have seen so much tragedy, they no longer fear arrest.

Haftom Gidey, a resident of the war-torn town of Hawsen, says he no longer fears war or arrest. He has seen too much already.

Mass graves litter the countryside as massacres continue here and in neighboring regions. Refugees are still fleeing to Sudan and many areas are cut off from humanitarian aid. Hundreds of thousands of people are living in “famine-like” conditions and the U.N. now says at least two million people in three Ethiopian states have fled their homes.