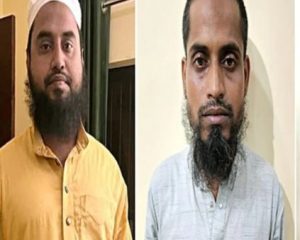 Assam Police and Central agencies on Thursday arrested 11 people, including a Madrassa teacher, for alleged links to terror organizations Al-Qaeda in the Indian Subcontinent (AQIS) and the Bangladesh-based Ansarullah Bangla Team (ABT), like reported by dnaindia.com.

In response to the arrests, Assam Chief Minister Himanta Biswa Sarma remarked, “From yesterday to today, we have caught two Jihadi modules in the Assam districts of Barpeta and Morigaon and detained all the people connected with Jihadi modules.” This coordinated action with national police agencies was a collaborative effort, and we will learn a lot more from these arrests.”

“We have closed 700 government madrassas and now we have started general education in them. In one module, we caught a Madrassa teacher. All the children in those closed madrassas will be taken to the general schools,” he further said.

“Assam Police has detained 11 people from Morigaon, Barpeta, Guwahati, and Goalpara districts,” said GP Singh, Special DGP L&O, Border, Director V&AC, and Chief Anti-Rhino Poaching Task Force, Assam. They are linked to Islamic fundamentalism and have ties to global terror organizations such as AQIS and ABT. Further action is being taken in accordance with the law.”

According to the Assam Police, Mustafa alias Mufti Mustafa, who is an accused in the case, is a resident of Saharia Gaon in the Morigaon district, and an active member of the Ansarullah Bangla Team (ABT) which is linked to Al Qaeda in Indian Sub-continent (AQIS).

He is an important financial conduit of the ABT module in India.