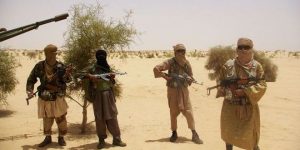 The expansion of Al-Qaeda attacks in Mali threaten dozens of Moroccan truck drivers who transport goods to sub-Saharan Africa every day, like reported by middleeastmonitor.com.

The terror group has hit a 3,700-kilometre road to Morocco and it “has now become dangerous,” according to a report published by the Spanish news agency (Efe).

It all started when gunmen presumed to be affiliated with Al-Qaeda killed a truck driver and his companion, both of whom were Moroccan, on 9 September.

The attackers withdrew after the attack without taking anything from the trucks, which rules out that the motive behind the attack was theft.

No group has claimed responsibility for the attack, but Al-Qaeda affiliates have admitted to carrying out similar attacks on Moroccan drivers.

Ten days of driving
To reach Mali’s capital from Morocco, truck drivers travel about 3,700 kilometers, which normally takes ten days, unless two drivers go on the trip, then it will only take eight days, of which a whole day is spent waiting in the long truck lines at the Guerguerat border crossing between Western Sahara and Mauritania.

Once in Mali, part of the cargo is unloaded at Bamako, which in turn is a strategic transportation point; Another part of the shipment goes from there to different countries in the sub-Saharan region; Niger, Ivory Coast, and Burkina Faso.

Some estimates put the number of Moroccan trucks working on that road to be between 1,300 and 1,800, depending on the seasons.

The head of Mali’s Financial Transport Council, Youssef Traoré, said terror groups “carry out attacks against trucks operating between Malian cities and neighbouring countries on a daily basis. Many attacks occur between Zhao and Sevare (in the north) and no one is compensating the owners.”

Traore added: “The terrorists carry out their attacks on this road to punish the truck drivers; who supply the United Nations Mission in Mali (MINUSMA) with fuel, which is a target for terrorists, especially to pro-Al-Qaeda.”