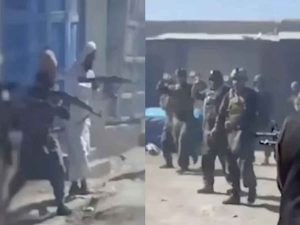 The Afghan Taliban have executed over 100 members of the now-defunct Afghan government, with a majority of those killed consisting of security forces personnel and Afghan employees of Western military forces. This information is included in a confidential report by the United Nations Political Mission in Afghanistan, which was produced earlier this month.

The Taliban completed their swift take-over of Afghanistan on August 15 of last year. On that day, they entered the Afghan capital Kabul, facing almost no resistance by the Afghan National Army and the country’s security forces. Shortly afterwards, senior Afghan officials pledged that their regime would extend a “general amnesty” to government employees, including Afghans who worked with the United States-led International Security Assistance Force (ISAF).

The report was produced for the United Nations Security Council. According to the Associated Press, which accessed a copy of the report, it contains “credible allegations” that most of those who were executed did not receive even a rudimentary form of trial. Instead, their deaths were the result of “extrajudicial killings”, which were carried out “by the Taliban or its affiliates”. In addition to those killings, the United Nations report contains “credible allegations” of at least 50 extrajudicial killings of alleged members of the Islamic State-Khorasan Province. The Taliban have been engaged in a brutal war against the Islamic State branch in Afghanistan since 2015.

The report also details what it describes as systematic violent actions by Taliban against civil society activists. These include enforced disappearances, temporary arrests and detentions, physical beatings, as well as systematic threats and various forms of intimidation issued against growing numbers of Afghans. A substantial portion of the targets of these activities are former members of Afghanistan’s security forces and ISAF employees, according to the report.