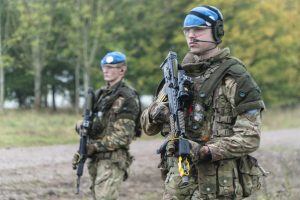 Three hundred British troops have been completing their final training ahead of a six-month deployment to Mali, like reported by forces.net.

The Task Group, led by the Queen’s Dragoon Guards, will take over from the Light Dragoons and Royal Anglian Regiment on Operation Newcombe.

MINUSMA is regarded as the world’s most dangerous peacekeeping mission – more than 240 UN peacekeepers have died in the country.

Those dangers were demonstrated last week after British troops deployed on the mission were fired at for the first time since 2014 while on a patrol in the east of Mali.

The UK soldiers returned fire, killing two individuals that the Ministry of Defence said were members of a ‘terrorist armed group’.

The personnel getting ready to deploy to Mali have been put through their paces at Stanford Training Area in Norfolk, completing their final mission rehearsal exercise.

They will be based 750 miles from the capital Bamako as part of the Long Range Recce Group in the Gao region in the east of the country, providing advance eyes and ears for the UN stabilisation force.

Lieutenant Colonel Hugo Lloyd, Commanding Officer of the Queen’s Dragoon Guards, said: “Its core role is to find and understand what’s going on in an environment by talking to people, by engaging with them and to also, where necessary, to deter threats to security.”

Mali is one of the world’s poorest and most unstable countries.

Forming part of the fragile Sahel region – Mali has come under continuous threat from poverty, climate change and extremism.

It is thought extremists, including the Islamic State of the Greater Sahel (ISGS), are causing severe instability in Mali and across the Sahel region.