GERMANY’S Vice Chancellor has called for a ban on Islamist mosques in the country, like reported by express.co.uk 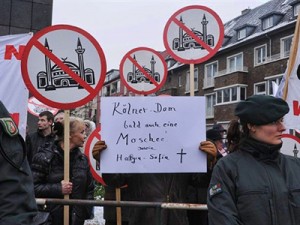 He believes a “zero-tolerance” stance against radical Islam is needed to stop communities becoming “degenerate”.

Mr Gabriel wants the proposed crackdown to focus on Salafism – an ultra-conservative branch of Islam based on Sharia law.

He said: “Salafist mosques must be banned, communities dissolved, and the preachers should be expelled as soon as possible.

“Those who encourage for violence do not enjoy the protection of religious freedom.

“If we are serious about the fight against Islamism and terrorism, then it must also be a cultural fight.”

His comments come weeks after ISIS extremist Anis Amri killed 12 people and injured 50 others in the Berlin terror attack.

The Tunisian, who was known to authorities, ploughed a lorry into a packed Christmas market in the German capital.

He was discussed seven times among security chiefs before the attack – but they decided he did not present a clear and present danger.

But she insisted the country would remain “free, considerate and open”.

She said: “Our values are the opposite of the hate-filled world of terrorism and will prove stronger than it. Together we are stronger.”