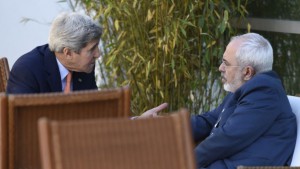 A top-level meeting at the Iran nuclear talks this week was a stormy affair, Iranian media reported Wednesday, with the country’s foreign minister warning European counterparts to “never threaten an Iranian.”

The altercation happened on Monday evening as foreign ministers from Iran and six major powers including US Secretary of State John Kerry met in Vienna seeking to nail down a historic nuclear accord.

They failed to overcome their remaining differences, and have given themselves until Friday to finalize the accord to end a 13-year standoff over Iran’s nuclear ambitions.

The spark, during a discussion on lifting an arms embargo as part of the nuclear deal, came when other ministers expressed concerns about Iran being a destabilizing influence in the Middle East, Iranian media reported.

This prompted Iranian Foreign Minister Mohammad Javad Zarif to threaten to drag the others before an international court for supporting former Iraqi leader Saddam Hussein, an archenemy of Iran, the reports said.

Diplomats stopped short of confirming the comments, but one senior Western envoy said the meeting saw a “very heated exchange of views.”

The reported remarks from Zarif to EU foreign policy chief Federica Mogherini have since trended on Twitter under the hash tag #NeverThreatenAnIranian.

Russian Foreign Minister Sergei Lavrov added at the talks, jokingly, that no one should ever threaten a Russian either, Iranian media reported.

During a separate meeting between Kerry and Zarif, other residents at the posh Coburg hotel heard shouting and raised voices, prompting a Kerry aide to poke his head round the door and advise the two to pipe down, a diplomatic source said.

The normally smiley Zarif, 55, who has spearheaded Iran’s efforts to seal the nuclear deal for the past almost two years, is known to have something of a fiery temper.

According to the IRNA news agency, Zarif said he was asked in February by supreme leader Ayatollah Ali Khamenei, “Why are you shouting in the meetings? Smile and talk as you usually do.”

A second Western diplomat said that Zarif has an “explosive temper. He is passionate, with a booming voice.”

A spokeswoman for Mogherini tweeted only that “relationships are based on openness, frankness and mutual respect.”

And a spokesman for the Iranian delegation, Alireza Miryoussefi, tweeted comments from Zarif saying that Mogherini “has always had a very positive and constructive role” and “our relations have always been governed by mutual respect.”

“The same stands true with regard to other ministers present in the negotiations and despite political differences,” he said.