You are here: Home / MidEastGulf / Zarif calls for ‘multi-faceted’ campaign against Daesh 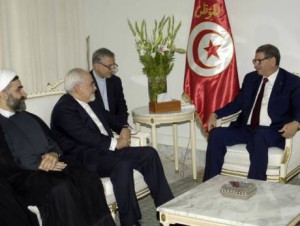 Iranian Foreign Minister Mohammad Javad Zarif called Tuesday for a ‘multi-faceted’ campaign against Daesh during a visit to Tunisia.

“We believe and I think we agree with our Tunisian friends that the fight against Daesh is not simply a military operation,” he said.

“It has to be a multi-faceted cultural, religious, political, economic and if necessary military campaign against this threat,” he said.

“We need to uproot the sources and the main reasons that give rise to this phenomenon.”

Daesh has claimed responsibility for two major attacks in Tunisia this year in which 59 foreign tourists and a policeman were killed.

Meanwhile, Zarif said he hoped the US Congress would not be swayed by “warmongers’ propaganda” over the nuclear deal struck between Tehran and world powers.

“What happens in the US Congress, that’s certainly a US issue,” he told a news conference in Tunisia.

“We believe it’s a mutually beneficial agreement,” Zarif said of the July 14 accord on scaling down Iran’s controversial nuclear programme in exchange for a lifting of international sanctions.

“And if people are not too much concerned with the propaganda being raged by warmongers in our region and outside our region, there’s no reason for the deal to face any impediments in the United States,” said the minister who negotiated the deal.

Congress is due to vote this month on whether to endorse the agreement between Iran and six world powers – Britain, China, France, Germany, Russia and the United States.

Republicans strongly oppose the deal, saying it makes too many concessions to the Islamic republic and does so at the expense of the security of America and its chief ally Israel.

If the Republican-dominated Congress passes a resolution against the deal, President Barack Obama is expected to veto that move.