You are here: Home / Senza categoria / ‘You even stop thinking of your own family’: meet the Isis fighters addicted to amphetamine 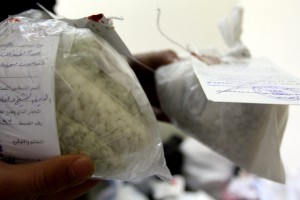 ‘We would fight them, slaughter them,’ Aadheen told me. ‘The moment we take a pill we would stop thinking about anything.’ The pill he’s referring to is Captagon, an amphetamine that’s said to fuel some of the brutality associated with Isis. In November last year, Turkish authorities seized 11 million Captagon pills on the Syrian border. In the same month, a Saudi prince was arrested after two tonnes of Captagon pills were found in cases being loaded onto a private jet. Aadheen is a former Isis member; he’s now a drug addict in hiding.

We met late at night in a safe house arranged by his dealer, close to the Syrian border. Aadheen sat silently in the corner, gently rocking back and forth. He was waiting for his next fix. He spoke so softly at times it was impossible to believe this mild mannered, scrawny man could have been a killing machine. But he was.

Captagon is a small white pill that looks like paracetamol. It’s a mixture of an amphetamine called fenethylline, caffeine and other substances. When he takes it, Aadheen told me it can keep him awake for three days straight. When it’s in his system he feels nothing, he said. ‘You even stop thinking of your own family.’

Drugs and violence have a long association, but I wanted to know why he’d joined Isis in the first place. How could someone affix themselves to a group that’s become synonymous with pure evil in the minds of the West? When I read about how Isis recruits from Britain, much of the discussion focuses on ideology and the alienation which drives people into the Syrian conflict. And yet before the conflict, Aadheen was a moderate Muslim, in a country where his faith was not at odds with those around him. His reasons for joining seem more practical than ideological.

‘I was fighting with the Syrian army when Isis took over the area,’ he said. ‘I joined them for my own protection and protection for my family.’ I’d heard similar tales from other former fighters who’d joined Islamist militia like Isis or Nusra Front. Not one had told me they signed up because they shared the group’s ideology.

One other reason I heard over and over again was money. ‘Isis pays $800 a month, Nusra Front $100,’ said another former recruit called Dabir. He joined the Syrian uprisings in 2011 after seeing children and women killed by his government. ‘They called a five-year-old a terrorist. How could they do that?’ he asked me. That, he said, was what made him defect, but it was the money that had kept him.

He initially joined Nusra Front, sometimes called Al-Qaeda in Syria, but when Isis took control of the area he was in, he defected again. ‘We had only heard about Isis through the media,’ he said. ‘We saw videos of them cutting people’s heads off.’ So why did he join a group he knew was so depraved? Again it came down to protection. ‘I have a wife, two children, a mother,’ he said as tears started to well up in his eyes.

It’s hard to imagine the men behind what the UN has recently described as ‘possibly genocide’ to be so human. None of the Isis members I met were the blood-thirsty, repugnant individuals that we have come to associate with the ‘Jihadi John’ videos. Dabir and Aadheen were both family men who had held down stable jobs. When violence spread to their homes, they took the easy road. They joined the groups they thought would offer the most security to themselves and their families.

After they joined Isis, they were both given pills of Captagon to suppress their emotions, to keep them awake for prolonged periods. They became addicts. Drones. While they both managed to find the strength to leave Isis behind, they now carry more than just the burden of what they did. The twist of fate is that while joining the group guaranteed the safety of their families, leaving it probably signed their death warrants.

A tear finally rolled down Dabir’s cheeks. Aadheen had cried at this point too. It was something they both knew they would always have to live with. Their only solace is more Captagon and even that doesn’t dull all the pain.