You are here: Home / Europe / “You ain’t no Muslim, Bruv”: Britain’s powerful response to the London Underground attack 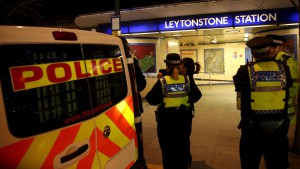 After a man stabbed three people at a London Underground station on Saturday night, reportedly crying, “This is for Syria,” one bystander’s response has started trending on Twitter.

In a video posted on Twitter by @LowkeyMo_, a witness can be heard yelling at the alleged attacker, “You ain’t no Muslim bruv.”

The quintessentially London reply (“bruv” is a London word for “mate”) has been widely used on Twitter by those who want to show that the attack—which left one man with serious injuries and two others with more minor wounds—was not a reflection of true Islam.

A video of the attack at Leytonstone station in east London shows the alleged attack being Tasered and subdued by police. Counter-terrorism detectives believe the man was acting alone, according to The Guardian, and Commander Richard Walton, who leads the Metropolitan Police’s counter-terrorism command, said the stabbing is being treated as “a terrorist incident.”