You are here: Home / MidEastGulf / Yemen’s Houthis in Saudi for talks on ending war 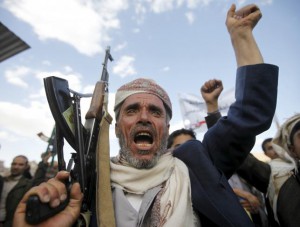 Officials of the Iran-allied Houthi movement are in Saudi Arabia for talks on ending Yemen’s war, two officials from a Houthi-controlled administrative body said on Tuesday.

The Houthi visit, the first since the war began in March last year between Houthi forces and a Saudi-led Arab coalition, began on Monday at the invitation of Saudi officials, following a week of secret preparatory talks, they said.

A spokesman for the coalition did not respond to requests for a comment on the report by the two officials of the Yemeni Revolutionary Committee, which runs areas of Yemen controlled by the Houthis. A spokesman for the Saudi foreign ministry could not immediately be reached.