You are here: Home / MidEastGulf / Yemen’s Houthis enter base on Bab el-Mandeb strait 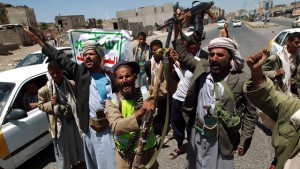 Soldiers of the 17th Armoured Division in the Dabab district in Yemen’s southwestern Taiz province opened the gates to the Houthis, whose military advance has been challenged by six days of Saudi-led air strikes.