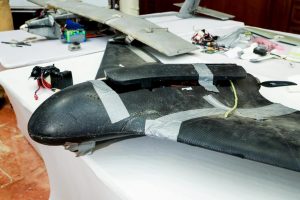 Iranian support has boosted the capability of deadly drones used by Yemen’s Houthi rebel, new research has concluded according to thenational.ae.

The paper by Conflict Armament Research (CAR), a UK-based think tank, says the rebels have also begun the domestic manufacture of parts as a workaround against anti-smuggling efforts to enforce an arms embargo.

US warships have recently intercepted several weapons shipments from Iran that authorities say were destined for the Houthis in Yemen.

The supplies from Iran and the Houthi homegrown development of technology has allowed them to acquire drones that are more sophisticated and more dangerous than those they used in 2016 shortly after the start of the five-year conflict.

Whereas the Iran-backed group used to rely on drones and Unmanned Aerial Vehicles (UAVs) that were not weaponised to crash into systems used by the Saudi-led coalition, they now have the ability to fly longer missions “which are designed to deliver an explosive payload.”

“Since the start of the Yemen conflict in 2015, the Houthis have employed UAVs over longer distances and with greater explosive payloads. Understanding the lines of supply with which such material is procured, is key to identifying the parties responsible for their supply,” said Jonah Leff, director of operations at CAR.

“Our examination of the internal components and parts of Houthi UAVs reveals that in many cases they match other lethal items documented throughout the region, with Iran being the likely benefactor in their supply,” he added.

CAR found that the Houthis have begun to create a hybrid UAV that uses a mixture of domestically and internationally produced technology. One reason for this, such as in the case of airframes, is that their size makes them harder to smuggle.

“Some components are also identical to those contained in Iranian UAVs and among components seized from the Jihan 1 merchant vessel, which Yemeni forces interdicted while the ship was ferrying weapons from Iran to Yemen,” the report also said.

The Jihan 1 was an Iranian ship full of weapons that was seized by Yemeni authorities in 2013 and believed to have been bound for the Houthis. Onboard were thousands of blocks of C4 plastic explosives and other weapons including surface-to-air missiles.

“As the UAV threat continues to evolve in the Gulf and wider Middle East, it is critical to assess commonalities in device construction and in the supply routes used by the various entities operating across the region,” CAR said.

“Enhancing knowledge of non-state groups’ capacity to obtain and use commercially available components for lethal means, and the lines of supply with which such material is procured, is key to identifying the parties responsible for their supply,” the report added.

Weapons inspectors have previously identified Iran as the source of military-grade parts for home-made bombs that have been seized from militants in Bahrain.