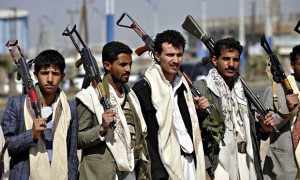 Yemen’s Houthi movement is considering withdrawing from Sana’a and handing over government facilities to state authorities, Asharq Al-Awsat has learned.

The Houthis’ Security Committee held a meeting in Sana’a on Monday to discuss the possibility of pulling out of the capital and handing over security checkpoints and government facilities to state authorities, a Yemen source told Asharq Al-Awsat.

The meeting was chaired by Jalal Al-Ruwaishan, the Houthi-appointed interior minister, and attended by members of the so-called Revolutionary Committee.

The step comes after the Iran-backed group has suffered a series of defeats at the hands of forces loyal to Yemen’s exiled President Abd Rabbuh Mansur Hadi, backed by the Saudi-led coalition, who recently retook the strategic city of Aden and much of the country’s south.

The Houthis overran Sana’a in September 2014, toppling the government and placing the freely elected President Hadi and other senior members of his cabinet under house arrest. After fleeing his Houthi captors, Hadi established a temporary base in Aden before he eventually fled to Riyadh in the face of a rebel advance.

Meanwhile, Yemen’s ex-president Ali Abdulah Saleh reportedly issued directions to his followers in the General People’s Congress (GPC) party not to follow Houthis’ orders in a fresh sign of the widening rift between the former president and the Houthi insurgents.

President Hadi and Saudi Arabia accuse Saleh, who wields strong influence within Yemen’s army, of facilitating the Houthi control of Sana’a and other parts of Yemen.

The new instructions, a Sana’a political source maintained, came after Saleh began to feel that his party members “have drawn closer to the Houthis than to [the GPC].”

“The GPC lacks a political strategy and is mainly based on [personal] gains,” the source added.

Saleh, over the past months, has been trying to secure a safe exit for himself and his family, the source said, “But he does not want to look defeated.”

“[Saleh] wants the war to stop so that he can remain GPC leader which he thinks should participate in the future political process,” the source added.

In a letter attributed to Saleh, the former president urged his followers not to believe rumors about disputes arising between the GPC and the Houthi Ansar Allah group.