You are here: Home / MidEastGulf / Yemen’s Houthis are doing more damage than good 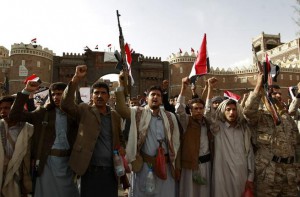 The pro-Iranian Al Houthi militias do not represent the Yemeni people; they are a small minority of the Shiite population who’ve used violence to impose their rule over the country. Its leaders are not men of their word. They’ve reneged on agreements made with the legitimate president Abd Rabbo Mansour Hadi and laughed in the face of a UN Security Council Resolution calling for the Al Houthis to withdraw from seized areas.

The Saudi-led military intervention “Storm of Resolve” was a correct response to the belligerency of this Iranian-funded and armed gang that threatens not only the Yemeni people but also the territorial integrity of the Saudi kingdom. Yet rather than lend its full support to this operation aimed at subduing the hegemonic ambitions of the Al Houthis and their Iranian backer, the international community pursues dialogue towards giving these barbarians a piece of the political pie.

Secret talks between the Al Houthi leaders and US Assistant Secretary of State for Near Eastern Affairs Anne Patterson (a former ambassador to Egypt who became the country’s most hated woman for her aggressive championship of the Muslim Brotherhood) have undermined the efforts of the Saudi-led coalition.

White House spokeswoman Marie Harf said the meetings were “part of a broad engagement with elements of the Yemeni political spectrum” intended “to reinforce our view that there can only be a political solution to the conflict in Yemen and that all parties, including the Al Houthis, should commit to participation in the UN-led political process”.

Yesterday, the UN-facilitated talks began in Geneva, which already appear inauspicious by the delay in the arrival of the Al Houthis delegation [the delay was due to logistical reasons].

President Hadi has condemned Tehran’s “dangerous meddling” in his country and insists that no ground will be given to the Al Houthis. The only thing he’s prepared to discuss, he says, is how to implement UN Resolution 2216.

Peace talks might work with rational actors but aren’t feasible with respect to a terrorist militia out to place Yemen under the Iranian boot. In this case, what’s preventing the US saying pretty-pretty please to Hezbollah to quit its domination and political paralysis of Lebanon or from setting up cosy chats with the “caliph” Abu Bakr Al Baghdadi to persuade him from lopping off heads in return for seats in the governments of Iraq and Syria?

A cynic would be forgiven for imagining that the Obama administration’s core foreign policy is to heap rewards on Iran and its proxies to the detriment of predominantly Sunni Arab countries, in particular Saudi Arabia and the Gulf states. Iran and Hezbollah were mysteriously removed from the US terror threat list. Obama has acceded to the presence of Iranian Revolutionary Guards in Iraq and he’s been pushing for détente with Tehran ignoring the voices of dissent in Congress as well as the concerns of America’s closest regional allies, Israel and the Gulf states, which were subjected to a charm offensive to lure them into acceptance. He has also crossed Syria where Iran and Hezbollah are fighting shoulder-to-shoulder with the Bashar Al Assad regime, off his “to do” list.

Clearly the US president is a man with a mission to empower a country that was until recently the arch enemy of his own. According to numerous reports in the mainstream media, US President Barack Obama blocked Israel from targeting Iranian nuclear sites last year with a threat to shoot down Israeli warplanes in mid-air.

When you line up the ducks in rows, the picture is so extraordinary that one can only assume Obama harbours a covert endgame conceived to work in Iran’s favour to serve US interests.

In any event, Saudi Arabia would be wise to complete its objective in Yemen. It would be a grave mistake to submit to international pressure before victory is achieved. Doing so would let down the Yemeni people and signify that the kingdom and its Arab allies are willing to give in to foreign diktats instead of asserting their independence within a neighbourhood fraught with Iranian militias and terrorists.

The Yemen initiative is a test that will either prove that the Gulf states cannot be messed with, which will send a message of deterrence to other ragtag rebel groups elsewhere — or, if it’s seen to be half-hearted, will serve as a bad precedent that will leave the region vulnerable.