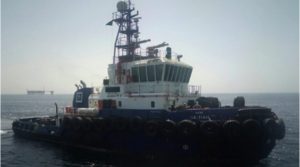 A Saudi Arabian tugboat was seized by Yemen’s Iranian-backed Houthi rebels on Sunday, according to the state-run Saudi Press Agency SPA.

The vessel was towing a South Korean drilling rig in the south of the Red Sea when it “fell under hijacking and armed robbery by two boats,” Saudi military spokesman Colonel Turki al-Malki told a news conference, SPA reported. He did not say how many crew members were aboard the ship.
The Saudi ship was reportedly among three vessels seized within 3 miles (4.8 km) off Uqban island and taken to the Salif port in western Yemen, according to the Houthi-run Al-Masirah news agency. Al-Masirah did not report on the origin of the other two ships.

Two South Koreans were among those captured, Kim In-chul, a spokesman for South Korea’s Ministry of Foreign Affairs confirmed on Tuesday.
“The South Korean nationals on the captive ships are safe and healthy and their families have been notified.” Kim said.

Major shipping route
The Red Sea is a major oil shipping route, bordered to the north and west by the African nations of Egypt, Sudan, Eritrea and Djibouti, and by Saudi Arabia and Yemen to the east.

A series of attacks on oil tankers and production facilities in the region has increased tensions in recent months, including drone strikes on Saudi Arabia’s Abqaiq oil processing facility — the largest of its kind in the world — in September, which halved the country’s production.
Houthi rebels claimed responsibility for the attack, but both Saudi and US investigators claimed “with very high probability” that it was launched from an Iranian base.

Seizure condemned
Saudi military spokesman Al-Maliki called the seizure of the ship Sunday a “terrorist operation” that posed a threat to the freedom of international navigation and world trade.

The conflict in Yemen began in early 2015 when Houthi rebels — a minority Shia group from the north of the country — drove out the internationally-recognized government and forced its president, Abdu Rabbu Mansour Hadi, to flee.

The crisis quickly escalated into a multi-sided war, with neighboring Saudi Arabia leading a coalition of Gulf states against the Houthi rebels. The coalition is advised and supported by the US, among other nations.

A US official told CNN the government of Saudi Arabia had informed the US of the incident and said: “A Saudi-flagged vessel was seized and boarded by armed men while sailing in Yemen’s territorial waters”.