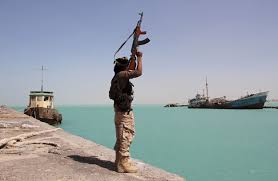 Yemen’s top Houthi rebel official on Tuesday offered a unilateral initiative to his group’s foe Saudi-led coalition forces to halt war in the Red Sea, like reported by xinhuanet.com.

“We declare our initiative to halt naval military operations for a specific period and it could be extended and include all battle fronts on the ground if this move is reciprocated by the leadership of the coalition,” chief of Houthi Supreme Political Committee, Mohammed Ali al-Houthi said in a statement carried by Saba news agency.

It is clear that the Houthi group is waiting for a response from the coalition to the proposal.

Saudi government said one of the attacked tankers was slightly damaged and said it will suspend its shipments until the waterway was secured.

Saudi Arabia and the United Arab Emirate (UAE) have been leading an Arab military coalition against Houthis in support of the Yemeni exiled government over the last three years.

The coalition forces launched a major military assault on June 13 to retake the Red Sea port city of Hodeidah from Houthis. The war is raging on.

The Houthi fighters seized control of much of northern Yemen, including the capital Sanaa, in September 2014, forcing internationally recognized President Abd-Rabbu Mansour Hadi and his government into exile in Riyadh.