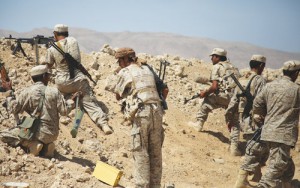 Saudi-backed loyalist forces in Yemen pressed an offensive against Huthi rebels on Monday, the second day of a major campaign aimed at retaking the capital a year after its fall.

Fighters loyal to exiled President Abedrabbo Mansour Hadi launched their much anticipated attack against the Iranian-backed rebels and their allies in the key province of Marib.

The escalation comes as the exiled government backed out of a proposed new round of UN-brokered peace talks, insisting that rebels should withdraw from captured territory.

Oil-rich Marib lies east of Sanaa and has been the scene of heavy clashes between the northern-based rebels and powerful tribes allied with Hadi.

“The aim is to cut the supply routes of the Huthis,” a military official told AFP.

Out of their Al-Aber base in nearby Hadramawt province, government troops have moved towards four rebel footholds in northwest Marib, on the route to Sanaa.

At a landing zone in Safer camp, in Marib, an AFP correspondent reported fully-armed coalition Apache helicopters taking off and returning, as a convoy of armoured vehicles and personnel carriers headed to the front.

Gulf Arab troops from the Saudi-led coalition have joined the battle on the ground to evict rebels from Marib, while coalition warplanes have since March pounded insurgent positions across Yemen.

The United Arab Emirates said its troops were taking part in the latest operations and announced the death of one of its soldiers.

“Our forces have launched military operations in Marib, achieving progress on the ground and pushing back the Huthi militiamen, as part of operations conducted by the Arab coalition,” a UAE military official said late on Sunday.

“During these operations, one of our soldiers has fallen martyr,” said the official, whose country lost 52 soldiers in the Safer missile strike and has vowed to avenge their deaths.

The coalition launched its air campaign to support the exiled Hadi after the rebels advanced on the southern port city of Aden, where he had taken refuge after escaping house arrest in the capital.

Pro-Hadi fighters, backed by troops freshly trained and armed by Saudi Arabia, pushed the rebels out of Aden in July and have since recaptured four other southern provinces.

The military gains were made following months of fierce air strikes against positions of the Huthis and troops loyal to ousted president Ali Abdullah Saleh, who has side with the rebels.

Air strikes on Monday were carried out mainly in support of the ground offensive in Marib, targeting Huthi strongholds in the southern part of the province.

Saudi Arabia said earlier that five of its soldiers had died on its southern frontier with Yemen in what appeared to be the largest single military loss in the border region since March.

Shelling and border skirmishes have killed at least 60 people in Saudi Arabia. Overall, more than 4,500 people, many of them civilians, have been killed in Yemen’s conflict since March, according to the World Health Organisation.