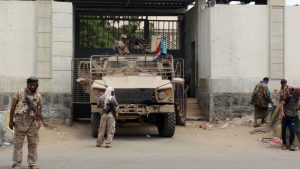 Three Yemeni soldiers were killed when suspected al-Qaeda militants opened fire on a military zone in the country’s Hadramawt province, a military source said to alaraby.co.uk.
“Three soldiers were killed in the attack on the first military zone in the al-Qoton district, and the gunmen managed to get away,” the anonymous source said.
“We suspect the gunmen belong to al-Qaeda,” the source added.
Hours later, an officer who was part of the presidential guard in Aden was kidnapped by gunmen in the southern province of Abyan, a security source said.
Al-Qaeda has flourished in Yemen as the country’s civil conflict shows no sign of waning.
Its Yemeni offshoot, al-Qaeda in the Arabian Peninsula, remains active in the vast region of Hadramawt, where a number of the extremist group’s leaders are based.
Since President Donald Trump took office in January, the United States has intensified its air attacks on AQAP, which it considers the global militant network’s most dangerous branch.
Meanwhile, Yemen’s Saudi-backed government has for years battled Houthi rebels for control over the country, the most impoverished in the Arab world.
More than 10,000 people have been killed and 40,000 wounded since an Arab coalition led by Saudi Arabia joined the Yemen war in 2015, according to the UN’s World Health Organisation.