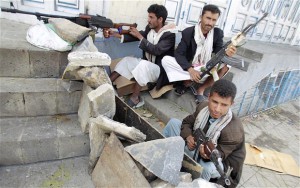 Armed Yemeni tribesmen deployed across the streets of Mukalla on Sunday, residents and local officials said to JP.com, taking control of the eastern port town which had been briefly overrun by al-Qaida militants.

The tribal fighters entered Mukalla on Saturday, pledging to restore security after the militants broke into its jail on Thursday, freed a local al-Qaida leader, ransacked banks and took over local government buildings, residents said.

The turmoil in Mukalla is another sign of Yemen’s collapsed central authority as a Saudi-led air campaign seeks to push back Shi’ite Houthi forces who control the capital Sanaa and are fighting for the main southern city of Aden.

Just outside Mukalla, the tribesmen fought with troops at a checkpoint before dawn on Sunday, killing two soldiers, tribal sources said. One tribal fighter was killed, they said.

A citizen’s group in the port city calling itself the Popular Committee for Security and Defence issued a statement on Sunday calling for residents and employees to defend hospitals and public buildings, to prevent a repeat of Thursday’s looting.

One of the prisoners freed from Mukalla prison on Thursday was named by Yemeni officials as Khaled Batarfi, a prominent member of Al Qaeda in the Arabian Peninsula (AQAP) who was arrested four years ago.

The United States had carried out a covert drone war against suspected members of AQAP, the powerful regional wing of the global jihadi movement, until March when U.S. personnel were pulled out of the country as Houthi forces advanced on the base north of Aden where they were operating.

The current security vacuum may offer AQAP an opportunity to entrench in Yemen’s sprawling eastern Hadramawt province, although they appeared to withdraw from Mukalla without offering serious resistance.