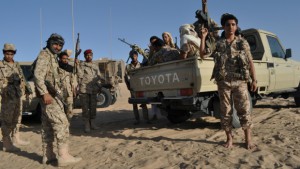 In Yemen’s Marib province, a key battleground in the fighting against Shiite rebels, frustration is growing in the ranks of troops backing the country’s president-in-exile after more than a week without gains on the ground.

The pro-government forces’ advance on the capital, Sanaa, has stalled as Iran-backed Houthi rebels put up heavy resistance and despite an airstrikes’ campaign by a Saudi-led coalition that has relentlessly pounded rebel positions.

The difficulty highlights the stark challenges facing the diverse set of fighters that make up the pro-government forces as they set their goal on Sanaa, about 165 kilometres to the west of Marib.

Ground commanders from the Yemeni army complain of poor logistical co-ordination, along with slow communication and decision-making between the Marib front-lines and the military leadership in Riyadh. Troops have grown nervous, commanders say, after two incidents when Saudi-led airstrikes hit and killed allied fighters.

In Yemen’s war, the coalition against the Houthis is a shaky combination of local and tribal militias, southern separatists, Sunni Islamic militants and army units local to President Abed Rabbo Mansour Hadi.

The ground forces are backed by a coalition of Gulf countries – led by Saudi Arabia and supported by the United States – that has been targeting the rebels with airstrikes since March. The Houthis, in turn, are supported by military units loyal to the former president, Ali Abdullah Saleh, and alliance that enabled them to take over Sanaa a year ago, overrun much of the country and drive Hadi into self-imposed exile in Saudi Arabia.

The Saudi-led coalition has been training thousands of pro-government troops and working with some Yemeni tribesmen. It has also brought in additional weapons, armour and trained personnel to the fight.

Initially, the pro-government troops’ fast push north from the port city of Aden, where they routed the rebels earlier this summer, signalled success.

But Marib appears tougher to take.

The strategic province, home to Yemen’s oil fields, shares a border with Saudi Arabia and many local tribes have had decades-long alliances with the kingdom. Thousands of Emirati and other coalition troops are on the ground, to help the pro-government forces. The provincial capital, Marib city, is controlled by pro-Hadi forces and the province’s deputy governor, Abdul Rab Ali, estimates that 80 per cent of the sprawling, mostly desert province is under their control, with the rebels contesting the rest.

“The real thing blocking the advance is our fear of raids from coalition planes – shelling or launching mistaken strikes against our forces,” said Brig. Gen. Mubarak al-Abab, a field commander for the Yemeni army.

“This has happened in error twice or more and killed a number of our forces … and the reason is that information or co-ordinates arrived to the coalition late,” he told The Associated Press.

On Saturday, a coalition airstrike killed 13 anti-Houthi fighters by mistake and damaged military equipment in Marib, other military officials said. Another friendly-fire airstrike last week also killed multiple fighters, though the officials could not provide an exact figure.

Fighters also face difficult terrain, with rugged mountains obstructing a westward push on Sanaa. Also, the Houthis and their allies have worked for months to make the terrain even less hospitable to the enemy, building fortifications, digging ditches, and planting land mines, security officials and independent tribesmen said.

Emirati Brig. Gen. Ali Saif al-Kaabi, who is with UAE troops in Marib, cited land mines as a major threat to the advancing forces and compared the province’s mountainous terrain to that of Afghanistan. An Emirati soldier was killed in a land mine blast last week, the country’s 54th fatality this month.

Yemeni Lt. Gen. Sherif Hussein said the various anti-Houthi forces are only loosely co-ordinated. There is unified decision-making, he said, but the groups on the ground fight independently.

As a result, the battlefield is disorganized, said Col. Ahmed Salem, another pro-Hadi officer. “If the situation continues this way on the front lines, then it won’t be possible to achieve victory on the ground,” he said.

Yemeni troops loyal to Hadi and allied tribal fighters were seen visiting a command post at the primarily Emirati coalition base near the town of Saffer in Marib during a visit by the AP last week.

The tribesmen chatted while seated in a circle on the ground with military commanders from the United Arab Emirates, surrounded by Oshkosh armoured vehicles and other Emirati hardware. The pro-Hadi troops, stationed at a nearby base, maintain checkpoints and the occasional tank position closer to the frontline further west. Tribal fighters, some in pickup trucks retrofitted with heavy machine-guns, roam the streets of the provincial capital and barrel over sand dunes in the surrounding countryside.

The stalled advance has prompted Hadi to call the Marib governor and a local military commander, according to Yemeni presidential officials, who like the security officials interviewed by the AP spoke on condition of anonymity because they were not authorized to talk to reporters about battlefield strategies.

Later, Yemeni state television reported that Hadi called Saudi Defence Minister Mohammad bin Salman to discuss the military situation in Marib. According to the Yemeni military officials, Hadi and Salman discussed the obstacles facing their forces in Marib, and ways get around them.

For now, the fog of war in Marib is obscuring the road to Sanaa.