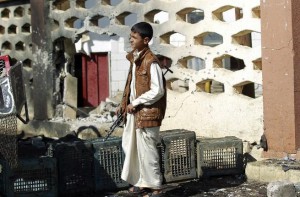 Yemen’s Iran-supported Houthi rebels and their allies signalled acceptance of a UN peace plan Wednesday aimed at ending a months-long conflict in the impoverished country.

UN envoy on Yemen Ismail Ould Cheikh Ahmed said that the Houthis had agreed to implement a UN resolution which demands that the rebels withdraw from areas under their control in Yemen and hand over their weapons to state institutions.

“The Houthis have agreed in writing to implement the UN resolution 2216,” the Mauritanian diplomat said on his Facebook page without giving details.

Houthi spokesman Mohammed Abdel-Salam said that his group was committed to a UN-brokered peace deal including acceptance of the Security Council resolution passed in April.

He added that the plan was the result of talks held last month under the auspices of the UN in the Gulf country of Oman and boycotted by Yemen’s internationally recognized government.

“We sent a letter to the UN secretary-general four days ago emphasizing this stance,” Abdel-Salam wrote on his Facebook page.

There was no comment from the Saudi-backed Yemeni government, which has repeatedly refused to participate in any peace talks with the rebels unless they accept the UN resolution.

The General People’s Congress Party of former president Ali Abdullah Saleh, who is aligned with the Houthis, Wednesday called for the start of negotiations on devising an “implementation mechanism” for the UN resolution.

The Houthis and military units loyal to Saleh seized large parts of Yemen including the capital Sana’a in a territorial sweep.

In March, Saudi Arabia and its fellow Sunni partners started an air campaign in Yemen after the rebels advanced on the southern city of  Aden, forcing President Abd Rabu Mansour Hadi, a Sunni, to flee the country.

In June, Hadi’s loyalists, backed by the Saudi-led coalition, regained Aden and drove the rebels out of most parts of southern Yemen.

Previous UN attempts to end Yemen’s war have failed amid worsening humanitarian conditions in the country.

More than 2,300 civilians have been killed in Yemen’s violence since March, according to UN agencies