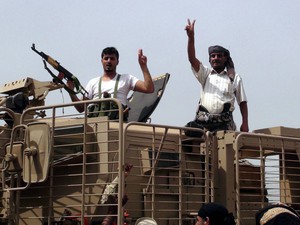 Pro-government forces in Yemen have retaken the country’s largest airbase in a battle with Houthi rebels, a spokesman for the forces told the BBC.

Heavy casualties have been reported at al-Anad airbase, north of Aden, after intense fighting there in recent days.

It comes after pro-government forces, backed by air strikes from a Saudi-led coalition, retook Aden in July.

The Yemeni forces are backed by a Saudi-led Arab coalition. BBC sources stated that tanks and troops belonging to the United Arab Emirates have been involved in the fighting, as well as training the Yemenis in operating advanced military equipment. Other sources said that the Emiratis were serving as advisers, but not actually fighting.

The Houthis captured Sana’a and prevented the formation of a new Yemeni government last October. Shortly afterward, Iran acknowledged its support of the Houthis, and an Iranian official boasted that Iran controlled four Arab capitals. In November, it was reported that members of the Iran-backed terrorist organization Hezbollah were training the Houthis.

The Saudi-led campaign to oust the Houthis and restore the American-backed government began in late March.