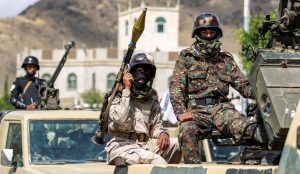 The Yemeni army announced that it had liberated all of Shabwa province in southeast Yemen from the Houthi rebels, like reported by aa.com.tr.

In a statement, the Giants Brigades, a militia affiliated with the Yemeni army, said that on the 10th day of fighting, their forces liberated Ain District in western Shabwa, adding all of the province’s districts are now under the army’s control.

The Houthi rebel group has yet to comment on the Yemeni army’s statement.

At the start of January, the Yemeni army launched a military campaign to liberate the districts of Usaylan, Bayhan and Ain in Shabwa province from the Houthis, who seized them in September last year.

Yemen has been engulfed by violence and instability since 2014, when the Iran-aligned Houthi rebels captured much of the country, including the capital Sanaa.

A Saudi-led coalition aimed at reinstating the Yemeni government has worsened the situation, causing one of the world’s worst man-made humanitarian crises, with nearly 80% or about 30 million people needing humanitarian assistance and protection and more than 13 million in danger of starvation, according to UN estimates.

A recent UN report projected that by the year’s end, the death toll from the seven-year Yemeni conflict will reach 377,000.