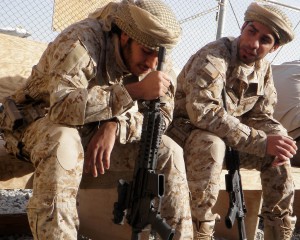 Three soldiers from the United Arab Emirates (UAE) were killed by landmines in the southern Yemeni city of Zinjibar on Saturday.

Air strikes by the Saudi-led coalition killed at least 20 militiamen in a “friendly fire” incident the same day.

The three Emiratis were killed by mines laid by retreating Houthi forces while entering the port city Zinjibar.

They were among around 1,500 coalition troops, mostly from the UAE, who have been in Yemen for a week fighting the rebel Ansar Allah (Helpers of God), commonly known as the Houthis.

The ground intervention followed months of bombing which did little to turn the tide in favour of exiled President Abed Rabbo Mansour Hadi, but which has killed thousands of civilians.

A coalition led by Saudi Arabia has provided Hadi loyalists with tanks and other vehicles — along with crews to operate them, ostensibly due to a lack of sufficiently trained personnel in Yemen.

Zinjibar lies some 40 miles to the west of the Hadi stronghold of Aden, from which Houthi forces were driven last week.

Coalition-backed militants captured the Labouza military base — the last southern outpost of the Houthis and allied army units — on Friday.But they left behind a car booby-trapped with explosives, which killed 15 Hadi troops on Saturday.

His visit, expected to last until today, is intended “to highlight the dire humanitarian situation in the country.”

Four Red Cross volunteers have been killed in the war.