You are here: Home / Analysis / Yemen, the shifting sands of war 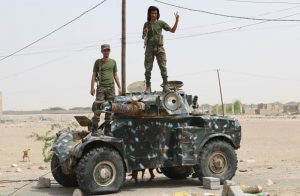 If one battle in Yemen’s war seems designed to kill as many fighters as possible, it is the one currently taking place in Ma’rib Governorate. Five years of fighting between Ansar Allah, usually referred to as the Houthis, and armed groups loyal to the internationally recognized Yemeni government have killed thousands on both sides, and the battle has been escalating. Neither side has suffered a full defeat or won a convincing victory. Both are fighting in terrain that makes it difficult to advance. What is taking place in Yemen is a largescale war of attrition, the main consequence of which has been the exhaustion of all sides. Even if one of the parties is victorious, this is usually followed by subsequent battles of attrition, like reported by carnegie-mec.org.

The western governorate of Ma’rib first saw fighting in January 2015, shortly after the Houthis seized the capital San‘a, some 170 kilometers west of the city of Ma’rib. The Houthis then tried to seize cities across Yemen’s north, prompting many anti-Houthi residents to flee to Ma’rib Governorate, where local tribes mounted strong resistance to the new rulers in San‘a.

In March 2015, when the Saudi-led military coalition launched operations against the Houthis, it began sending military support to the Ma’rib front, strengthening it as a center of resistance to the Houthis and attracting many of their opponents. The government created a battalion called the National Army, made up of soldiers who refused to submit to the Houthis, along with tribesmen and fighters from the Yemeni Congregation for Reform Party, known as Islah. These forces have since recaptured some areas from the Houthis.

Despite three years of relative calm, fighting resumed with a vengeance at the beginning of 2020. The Houthis seized some areas that had been under government and loyalist tribal control, notably in neighboring Jawf Governorate and the Nahem district, close to San‘a. Today, fighting on various fronts along the northern and northwestern boundaries of Ma’rib Governorate is killing dozens of combatants almost every day.

The Houthis have launched several major offensives to seize Ma’rib, which is rich in oil and is the largest stronghold of their foes, paying little attention to the casualties. They see control of Ma’rib as a strategically vital military and economic prize. Taking the sprawling desert governorate would neutralize the biggest threat to their control over San‘a, namely the presence of pro-government forces controlling large mountainous areas within San‘a Governorate. Economically, controlling Ma’rib also means taking over the Safer oil refinery that provides many parts of Yemen with their fuel needs.

But the Houthis have faced determined opposition from pro-government forces in Ma’rib. For them, defending the governorate has become a matter of life or death. This can be seen in the intensity of the current fighting and the Houthis’ failure to make decisive advances (in contrast to their fortunes in other governorates), despite having launched blistering offensives.

The battle for Ma’rib, therefore, appears to be a zero-sum game in which neither side has any option but to continue fighting, regardless of the human and material costs. Both sides realize that the battle’s outcome will decide much of the future political landscape of the country and its alliances. It is not a marginal battle but a delayed confrontation that has lasted since 2014 and has become a seemingly permanent feature of the hills and deserts of Ma’rib.

But what is behind the recent Saudi reluctance to deal seriously with the Ma’rib battle? And what is the reason for the Houthis’ growing determination to seize the governorate now? The answers to these questions reveal important factors in the dynamics of the clashes as well as underline the Saudi-led coalition’s changing policy toward its allies on the ground.

Since the launch of the intervention in 2015, Saudi Arabia has been allied with Islah and has depended on the party’s ground forces in the fight against the Houthis. But Riyadh and Islah are little more than allies of military convenience fighting a common enemy. As Saudi Arabia’s foreign policy priorities have changed over the past two years, Turkey has emerged as a key regional rival, even ahead of Iran, which unlike Turkey does not pose a challenge to Saudi Arabia’s claims to lead the worldwide Sunni community. This has made Riyadh suspicious of groups and movements that are sympathetic toward Turkish policy. Islah is one such group, as it has ideological ties with the Muslim Brotherhood, Ankara’s most prominent ally in the Arab world and which is opposed by Riyadh.

Despite the presence of other military and tribal entities, Saudi Arabia doesn’t see Ma’rib as something other than an Islah power base. This view is reflected on the ground, with many fighters on the front lines not receiving their salaries from Saudi Arabia, a reduction in Saudi military and logistical support, and attacks against Islah by pro-Saudi newspapers and websites that accuse the party of inaction in the fight against the Houthis, or even of making secret deals with them. Saudi Arabia has also imposed restrictions on the movement of some leading Islah commanders, sidelining them and relying instead on Salafis and pro-Saudi tribal commanders. This aligns with the view of the United Arab Emirates, Riyadh’s main coalition partner, which regards Islah as a threat whose elimination is a priority.

Riyadh sees weakening Islah politically and militarily as an essential step toward preventing the movement from opposing Saudi policies. For the Saudis, weakening Islah will silence the demands of some of its commanders for an equal say, forcing them into full compliance with the goals of the kingdom. Riyadh has already imposed its decisions on the Yemeni government, which has become entirely powerless to influence events in the country. But the kingdom also realizes that it needs to continue providing some support to Ma’rib’s defenders in order to prevent it from falling to the Houthis.

Saudi efforts to weaken Islah do not mean that it favors the Houthis. Rather, Riyadh sees the battle on the Ma’rib front as chipping away at the capacities of both sides, diverting their attention away from fronts along the border with Saudi Arabia. Thus, the Houthis’ attacks on Ma’rib have been accompanied by the loss of certain positions they had seized months ago in Jawf Governorate. Saudi Arabia regards moving the Houthis away from its own borders as a priority, and has thus boosted its military supplies to fronts near the borders while cutting its support for forces deeper inside Yemen. Meanwhile, it has become clear that the Houthis’ weak point is fighting in open areas, given their lack of an air force similar to the Royal Saudi Air Force, a key asset the kingdom can control without needing a local ally.

On the other hand, the Houthis’ ability to recruit fighters has enabled them to step up their attacks on Ma’rib, taking advantage of Riyadh’s changing policy toward its allies on the ground. This has been accentuated further by the dismissal in late August of the former commander of coalition forces, Prince Fahd bin Turki, and his replacement by Lieutenant General Mutlaq bin Salem al-Uzayma‘. While these steps may not change the thrust of Saudi policy, they could alter some deployments on the ground. The Houthis appear to be carrying out preemptive attacks to exploit this transition.

Against this background, events in Ma’rib could well change course in the coming months. There are three possible scenarios in this regard. First, and most likely, loyalist forces will continue to fend off Houthi attacks and the current stalemate will persist. This is probable in light of the fierce defense these forces have mounted, along with Saudi Arabia’s determination to prevent Ma’rib from falling for the time being. Such a scenario would largely resemble the situation in the city of Ta‘ez, where fighting has taken place since the beginning of the war without the Houthis being able to seize it. This would prolong the current war of attrition. But the situation may not last, especially if there is a breakthrough in talks between the Houthis and Saudi Arabia that would enable the latter to secure its southern border. Things could also change if the kingdom stepped up its support for anti-Houthi forces and raised the pressure on them on other fronts.

The second scenario would see Ma’rib falling to the Houthis. This is unlikely to happen and would only come with major human cost for both sides. Yet if the Houthis were indeed to win, it would open the door to further battles in Yemen’s southeastern governorates, especially Hadhramawt and Mahra, which the Houthis would not hesitate to attack. That would mean Saudi Arabia would lose its influence on the ground inside Yemen, but would begin a wider war of attrition against the Houthis. Controlling a large swathe of territory could be a point of weakness rather than an asset for Houthi forces, especially as the areas in question are outside their main constituency.

There is a third scenario, which is also unlikely at present, namely that agreements will be signed between local forces to pause the fighting and reorganize the situation in Ma’rib in light of the latest military developments. Making this situation more improbable is the deep enmity between the two sides, accentuated by the terrible losses caused by the recent fighting. On top of this, neither side has much faith in battlefield agreements, which can quickly collapse. Moreover, Saudi Arabia would never accept such a violation of its wishes, and loyalist forces are not in a position to persuade it to acquiesce.

As the fighting continues, Yemen’s humanitarian catastrophe continues to be ignored. Hundreds of thousands of displaced people live in camps in Ma’rib in terrible conditions, made worse by the fighting that is approaching them. Despite this, the global powers have done little to bring an end to the disaster.