You are here: Home / Analysis / Yemen: the forgotten war 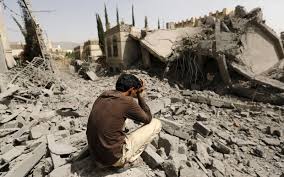 More than three years after an extensive bombing campaign across the country began, in March 2018, the war in Yemen was designated by the Secretary General of the United Nations as the world’s worst humanitarian crisis, like reported by soufangroup.com.

This acknowledgment might finally bring this ‘forgotten war,’ and the devastating plight of the Yemeni people, into the forefront for the international community., though it is also as likely that the world will continue to look the other way, with episodic pangs of publicity and muted outrage but no meaningful pressure on the belligerents and their supporters to resolve the conflict peacefully. Since the Arab Spring, the conflict plaguing Yemen, which sits between the Red Sea and the Gulf of Aden and shares borders with Saudi Arabia and Oman, has steadily worsened. If nothing is done, Yemen’s humanitarian disaster and internal security crisis are likely to create a security crisis for the region as well. Concerns range from the radicalization of the population to a flow of refugees out of Yemen to neighboring countries, on a scale similar to Syria.

The conflict is consistent in two glaring ways: the suffering of the Yemeni civilians, and the refusal by all sides and their supporters to reassess what they are trying to do and what they are actually doing. Civilian casualties have resulted from direct conflict, the use of starvation as a tactic of war, and the spread of disease due to a lack of medical infrastructure. In response to the November 2017 missile the Houthis launched at Riyadh, the Saudis announced an increase in the stringency of their coalition’s blockade. They dramatically increased their stronghold on ports, essentially starving a country in which 90 percent of food is imported, and 22 million citizens rely on humanitarian assistance for survival. Saudi’s blockade has effectively worsened the already catastrophic humanitarian crisis in Yemen.

Despite the undeniable loss of life and the wrecking of an already weak economy and infrastructure, there is no sign of any reconsideration about the conduct of the war. In fact, it appears all sides are again doubling down on their failing plans. On June 4, the Wall Street Journal reported that the U.S. is considering a request by the United Arab Emirates (UAE) to directly support its military campaign to seize the crucial port of Hudaydah. This would be a significant deepening of the already deep U.S. involvement in the catastrophic conflict.

The key regional players in the war in Yemen, each bringing both grievances and goals to the fight, are Saudi Arabia, Iran, and the United Arab Emirates (UAE). The Saudi coalition, which includes the UAE, wants to reestablish President Abdrabu Mansour Hadi—or another ally—as ruler. The coalition, with substantial U.S. support, is engaged in a proxy battle against Iran and its agent, Hizbollah, both of which provide arms and advice to the Houthi rebel force that attempted to topple the regime of President Hadi in January 2015. Saudi Arabia views the war in Yemen as having potentially large consequences for the regional balance of power, with not only a Sunni-Shi’a conflict at play, but also against the backdrop of a burgeoning Sunni-Sunni power struggle among various Gulf nations. Also of concern is the potential for conflict spillover into neighboring countries in Africa.

While the crisis in Yemen must end based strictly on humanitarian need, it is also important to consider the effects on global security of an unchecked humanitarian disaster. When famine and hopelessness truly set in, Yemen’s humanitarian crisis will converge with its security crisis. At that point, even if outside influencers end their roles in the conflict, Yemen will have become a nexus of strife and deprivation, likely to devolve into a decades-long global threat.