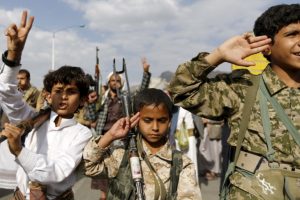 In August, Houthi rebels in Yemen celebrated the withdrawal of coalition forces from Afghanistan. “Every occupation has an end, sooner or later, and now America is realizing its failure after 20 years of its occupation of Afghanistan,” tweeted Houthi spokesperson Mohammed Abdulsalam, as a warning to their Yemeni opposition against working with foreign allies, like reported by insidearabia.com.

Another tweet by Abdalqadir al-Murtada, head of the Houthi National Committee For Prisoners Affairs, insisted that “America’s utter failure in Afghanistan should serve as an example to all those who rely on the American presence to secure their thrones.”

According to Yemeni analysts, the Houthis have also taken lessons from events in Afghanistan, drawing parallels between the Taliban’s swift victory over Afghan forces following the American withdrawal, and their own conflict against an internationally-backed coalition.

“The main thing that [the Houthis] are noticing is the backup that those governments enjoyed for quite some time, from Western democracies especially, is fading away,” Baraa Shiban, a Yemeni political analyst, told Inside Arabia.

Yemen’s internationally-backed government has viewed the US’ disengagement from the Middle East with trepidation. Its most supportive military ally, Saudi Arabia, which hosts the government in exile and intervened in Yemen against the Houthis in 2015, is widely thought to be searching for an exit to the Yemen conflict.

Furthermore, the Biden Administration put an end to the sale of precision guided munitions to Saudi Arabia in February, in the wake of at least 17,500 civilian casualties caused by Saudi airpower and other violations of international law. US National Security Advisory reportedly warned Saudi crown prince Mohamed Bin Salman that congressional legislation could further limit US support. At the same time, Houthi forces have made significant territorial gains in the south.

In a statement issued on August 15, Moammar Al-Eryani, Yemen’s Information, Culture, and Tourism Minister, urged the international community and forces in Yemen to learn from the West’s hasty withdrawal from Afghanistan and shore up support for coalition forces embattled by Houthi incursions.

In February, the Houthis launched an offensive to capture the internationally-backed government’s last stronghold in the oil-rich province of Marib. Since then, Houthi forces managed to seize neighboring al-Bayda province, nearly encircling Marib in late September and choking vital supply lines. With al-Bayda in hand, the Houthis can now press from the north and the south. If taken, the fall of Marib could mark a major turning point in the seven-year-old civil war.

“The Houthis are approaching Marib and the Saudis are still not providing enough military support to the forces on the ground to push the Houthis far away,” Yemeni political analyst Nadwa al-Dawsari told Inside Arabia. “They’re unwilling to mount a counteroffensive, they’re very comfortable staying in the defense position and mainly relying on airstrikes. The forces on the ground don’t have weapons, they literally ran out of ammo and that’s how Houthis take areas.”

The threat of a Houthi takeover in Marib, emboldened by signals of international disengagement, has prompted observers to warn of an escalated humanitarian catastrophe.

Marib is host to an estimated one million internally displaced persons (IDPs) across the province, many of whom fled Houthi advances from other regions.

According to the International Organization for Migration (IOM), at least 10,000 people were displaced in Marib in September alone. IDP’s are highly vulnerable to conflict, often lacking capital and exposed to unsafe living conditions.

Shiban told Inside Arabia that, following the Afghanistan withdrawal, Houthi media outlets have equated asylum seekers to foreign agents. “That was the most frightening thing, [the Houthis] were calling the people who were trying to flee from the airport in Afghanistan ‘mercenaries’ and they would say, ‘soon those mercenaries in Yemen wouldn’t even find an airport they can flee from,’” said Shiban.

Furthermore, Shiban explained that hosting IDPs could imperil Maribi locals as well. “It’s also going to be very difficult for people who are from Marib because for the Houthis, those are the people that gave all those people refuge.”

Meanwhile, beleaguered and undersupplied, coalition forces attempt to hold out in Marib. Morale is low among anti-Houthi forces, which are divided among themselves with rivalries in the south. Many among the coalition’s ground forces are also said to be disillusioned with the internationally backed government they defend.

Drawing comparisons with Afghanistan, Dawsari posits that “The Taliban knew that the US was desperate to leave and the Afghan government was so corrupt. I see parallels in Yemen. The Yemeni government is extremely corrupt living outside Yemen. And the Saudis are not very efficient militarily. The Houthis also know that the Saudis want to leave.”

Recently, Houthi advances have taken the al-Abdiyah and Harib districts within the province and fighting continues in others. “I think it’s only a matter of time before the Houthis take Marib,” lamented Dawsari. “It really pains me to say that, but all the signs are there.” Dawsari went on to speculate that if the Houthis take Marib, they may escalate the bombing of Saudi forces in the north until they decide to leave, ceding much of the country to Houthi domination.

According to her, foreign interventions among states with their own national interests have divided anti-Houthi forces in Yemen, enabling Houthi advances and complicating humanitarian concerns. In Shabwa province, Marib’s least Houthi controlled neighbor, but which also has witnessed fierce clashes, coalition forces are beset by tension between Saudi-backed President Hadi’s command and fighters of the Southern Transitional Council (STC), backed by the United Arab Emirates (UAE). The threat of violence in Shabwa could leave asylum seekers without safe alternatives if the Houthis continue to advance into Marib.

A Houthi takeover in the province could constrain the few strategic and diplomatic options left to coalition forces in Yemen and accelerate withdrawal. Ultimately, a pull out of Saudi forces will not necessarily mean the end of the civil war.

In conversation with Inside Arabia, Dawsari pointed out that conflict could continue in Yemen for many years to come even in the absence of foreign powers. However, the government’s loss of oil-rich Marib would be a massive victory for Houthi forces and a milestone in the Yemen conflict, which has already resulted in the death of at least 230,000 with some 70 percent of the country in need of survival aid.