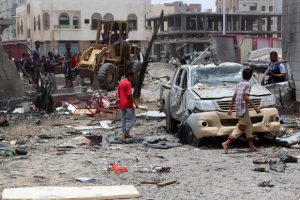 Two attackers detonated a car bomb in southern Yemen on Wednesday, killing themselves and five soldiers and injuring several others, residents and a local security official said.

The bombing took place in the Redhoom district of Shabwa province near a security checkpoint, they said, adding that the attackers died in the assault.

The local official added, without elaborating, that he suspected the attackers were affiliated with al Qaeda. Shabwa is one of several provinces in Yemen in which al Qaeda in the Arabian Peninsula (AQAP) is active.